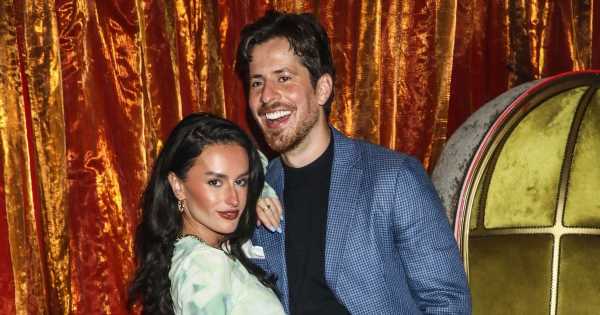 Former Love Island star Amber Davies packed on the PDA as she kissed her boyfriend Nick Kyriacou at her Cabaret All Stars Show, which took place at Proud Embankment in London.

The 25 year old Welsh beauty looked fantastic in a mint green leather skirt, which showed off her tanned legs, as she posed for cameras after the show.

She paired it with a printed top in the same colour scheme and wore sparkly court shoes as she posed with her beau after the event.

Her dark hair cascaded in loose curls that fell to her waist and she wore bronzed makeup and chunky gold earrings to finish off the look.

Her boyfriend looked dapper in black suit trousers and a blue blazer as he passionately kissed his girlfriend back.

That wasn’t the only time the pair got amorous as, during her stage show, Amber surprised her boyfriend by leaping off the stage to kiss him, much to the delight of onlookers.

Amber was wearing tiny denim hot pants and a pink fringed jacket as she grabbed her boyfriend by the face and kissed him on the mouth.

Later on in her performance, Amber changed into a dramatic red satin gown, and worked the audience as she was doused in water during the set.

Amber and Nick met during lockdown in 2020, after being introduced by a mutual friend.

They quickly went on to live together before briefly splitting, then reuniting, in 2021.

English actress, singer and television personality Claire Sweeney, 51, was also performing at the Cabaret All Stars show, and she showed off her vocal talents as she rocked an array of glamorous stage outfits.

One notable number was a Cinderella-inspired gown, decorated with sequins and gems that showed off her cleavage, with feathered sleeves and capped shoulders.

It featured a dramatic blue skirt, decorated with diamontes, that glittered as she belted out her songs.

Also in attendance at the star-studded event was Abbie Quinnen who was celebrating her birthday with Strictly Come Dancing boyfriend AJ Pritchard and his brother Curtis.

She paired up with Essex boy Kem Cetinay, and the couple went on to win the show.

They moved in together soon after, but the relationship wasn’t to be, as they went on to split later that year.