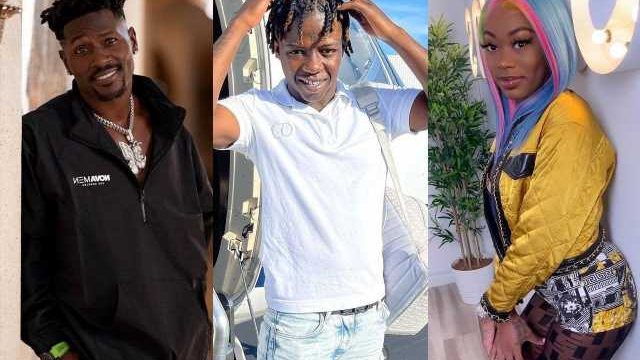 The Dallas-based femcee, who confirmed her breakup with the ‘Don’t Force My Hand’ rapper less than a month prior, shoots her shot with the NFL star by asking him for dinner.

AceShowbiz -Asian Doll (Asian Da Brat) and Jackboy are clearly not one of those friendly exes. After her former boyfriend made a disrespectful comment about her for shooting her shot with Antonio Brown, the “Pull Up” femcee was quick to fire back at him.

The Dallas-based artist, whose real name is Misharron Jermeisha Allen, tried to flirt with the Tampa Bay Buccaneers star on Wednesday, January 5. Taking to her Twitter account, she penned, “Wassup, Antonio Brown take me out to dinner.”

The tweet was then reshared by Onsite! on Instagram. Catching wind of the post, Jackboy commented, “@ab go ahead Ima team player my n***a when you done with her pass her back family.”

The remark did not go unnoticed by Asian. Seemingly upset by the insult, the Doll Gang Records artist tweeted, “Pass me back? Boy who coming back to you,” adding a couple of crying laughing emojis.

Asian confirmed her breakup with Jackboy in mid-December 2021. “SINGLE [celebration emojis] It’s time to live it up a lil mo,” she declared on Twitter. On the next day, she lamented, “I can feel me closing off my feminine side… s**t really sad cause idk how to turn it on once I’m hurt.”

In a separate post, the 25-year-old added, “Every time everybody leave me I be sad asf**k & lonely I really wish nobody would never leave me I crave they’re genuine company.” She then told her social media followers that she might date a woman, saying, “Might date a b***h,” along with a heart-eyed emoji.

Later that month, Asian enjoyed a night out with a mystery man. At that time, she treated her fans to a video of herself in the car with the man sitting behind the wheel. Alongside the clip, she simply wrote, “Love,” adding a black heart emoji.