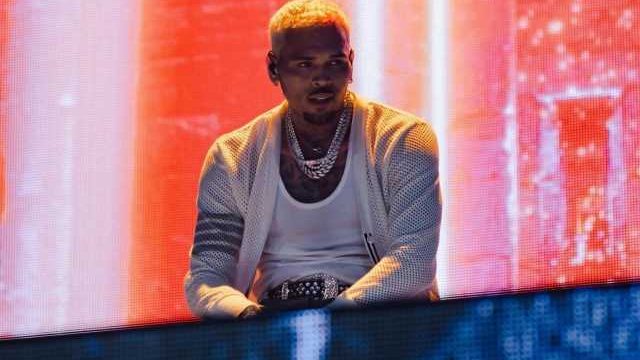 The ‘Say Goodbye’ crooner sends the audience into a frenzy after he accidentally rips his skinny jeans while performing his track ‘No Guidance’ in Detroit, Michigan.

AceShowbiz –Chris Brown has suffered a wardrobe malfunction. The “Say Goodbye” hitmaker drove his audience wild after he accidentally ripped his pants during his show in Detroit, Michigan.

On Saturday night, July 30, the “Under the Influence” crooner took to the stage to perform his hit song “No Guidance”. While showing off some dance moves, he unconsciously ripped his pants in the middle, prompting the audience to scream.

Realizing that he broke his skinny jeans, Chris, who paired his tight jeans with a white tank top, laughed at himself and quickly covered what appeared to be his underwear with his hand. Instead of running backstage, the 33-year-old decided to continue his performance.

After The Neighborhood Talk posted the clip via Instagram, many social media users were quick to pour their thoughts. “NAAUURR , NOT RIGHT DOWN THE MIDDLE,” one person exclaimed with another adding, “Them pants said ‘I’m Tired’.. All that dancing will do it.” A third chimed in, “Its been alot of stage malfunctions lately, but I’m here for it.”

“Lolllllll we was still cheering for him,” a fourth commented, while someone else quipped, “alexa play ‘ripped pants’ by SpongeBob.” One other fan even confessed that he/she “was there and was mad when he covered it up lol.”

This wasn’t the first time Chris ripped his pants while dancing on stage. In 2015, the “Brezzy” artist did the same thing during his show in Bridgeport, Connecticut. The crooner, who paired his too-tight jeans with a fitted black T-shirt and a green baseball cap at the time, was dancing along to iHeart Memphis’ single “Hit The Quan”, as the dance moves proved too much for his jeans.

A large hole ripped right along the crotch of Chris’ fitted trousers, revealing his red boxers as he danced. However, the star continued on with the performance, only running backstage to change once the song was over.

Chris later came back out and addressed the mishap after he pulled up his new pair of jeans. He jokingly told the audience, “I got another pair, hopefully, these motherf**ker won’t rip.”