The Duchess of Cambridge proved just how down to earth she is as she chatted to a young boy she thought was lost.

Kate was on her way to the Commonwealth Games and she chose to take the train up to Birmingham where she encountered the young boy, who is the son of Times columnist Matthew Syed. In a column, the journalist explained that he and his son, Ted, were travelling first class when he went to use the bathroom, while Ted waited outside for him.

WATCH: Duchess Kate blows a kiss to her parents in sweet moment at Wimbledon

He explained: “As I am doing my thing, I hear him talking to a woman in the vestibule. ‘Are you here alone?’ she asks. ‘No, my dad is in there’ – he says, pointing to the lavatory.”

Matthew continued, saying he heard the pair laughing together and that they were having a “whale of a time”.

As he left the cubicle, he went to thank the woman, before realising that it was the Duchess of Cambridge.

Kate was at the Commonwealth Games with William and Charlotte

His son, however, appeared to be none the wiser, as Matthew recalled: “‘Did you realise who that was, son?’ I ask him. ‘No idea but she was really nice,’ he responds.”

He concluded the piece by writing: “The Duchess had no idea she was chatting to the son of a journalist so I take this to reflect her character and sense of duty. The monarchy is in consummate hands.”

While Kate took the train to the event, Prince William and Princess Charlotte chose a more thrilling way to enter, as the Duke of Cambridge flew them in on a helicopter. 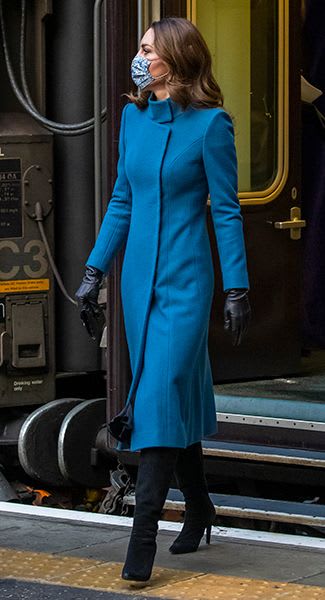 The Duchess enjoys travelling by train

William is an experienced and respected helicopter pilot, having served in the East Anglian Air Ambulance from 2015 to 2017.

He initially learned to pilot helicopters and fixed-wing aircraft in the RAF, and went on to train as a search and rescue pilot in 2009.

After passing his exams in 2010, he conducted 156 operations and qualified as an operational Captain.

Make sure you never miss a ROYAL story! Sign up to our newsletter to get all of our celebrity and royal news delivered directly to your inbox.