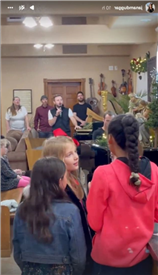 If you’re like most people, you probably weren’t too upset at the prospect of saying goodbye to 2021.

But no matter how rough this past year was for you personally, you can take some solace in the fact that the Duggars probably had it worse — and several members of the family deserved every ounce of the pain they experienced.

When he’s sentenced in April, the disgraced former reality star could receive up to 20 years behind bars.

And that wasn’t the only Duggar arrest of 2021.

She pled not guilty, and the Duggars insist that when the judge hears her side of the story, her case will immediately be dismissed.

(They insist that a child briefly wandered off while Jana was caring for too many kids at once, which, to be fair, is how she spends most of her waking hours.)

Still, it was another in a long line of scandals for a group of evangelicals who once prided themselves on their wholesomeness and their full-throated support of “traditional family values.”

Worse, both of these scandals involved the mistreatment of children — and even in these intensely divisive times, the majority of Americans can agree that there’s a special place in hell for people who are cruel to kids.

Needless to say, most families who live in the spotlight would probably take a media hiatus at a time like this.

They would issue the usual phony, boilerplate apologies and then go away for a while.

Sure, they would probably be plotting their comeback, but at least the world would have a break from their constant presence.

But as Jim Bob has demonstrated in the past, he takes a “never apologize, never surrender” approach to public relations.

Sadly, this strategy has worked for him before, and it looks as though he’ll be pursuing it again.

Back in 2015, the world learned that Josh had molested five young girls, and TLC quite understandably canceled the Duggars’ reality show.

In response to Jim Bob’s persistence, however, the network started production on a new Duggar-based reality show just months later.

Now, in the midst of the family’s latest scandal, Jim Bob is essentially acting as though nothing out of the ordinary happened.

And he’s encouraging his children to do the same.

The Duggar holiday parties are the stuff of legend among fans, as it’s not often that the family lets their hair down.

It was widely assumed that the annual festivities would be canceled this year, but to the surprise of many, the Duggars hosted their annual New Year’s bash to ring in 2022!

Even more surprising is the fact that pics and video of the shindig were posted by none other than scandal-plagued Jana!

Now, when we say the Duggars threw a “wild” party, it’s important to note that that’s a relative term.

As with all Jim Bob-hosted events, there was no booze, no secular music, and no dancing.

Still, the Duggars assembled and posted festive photos, which is sort of a surprise following the year they’ve had.

You would think that Jim Bob would instruct his kids not to post any evidence of the party, but then again, this is the same guy who ran for a seat in the Arkansas State Senate while his son was on trial for child pornography.

Thankfully, Jim Bob lost the election by a wide margin.

Unfortunately, it seems the defeat taught him nothing about how to handle a public scandal with tact and respect for those who were vicitimized.