Many top B-schools attach more value now to academic record, bachelor’s degree marks, work experience, performance in the personal interview, as well as gender and academic diversity — resulting in a decline of the weighting to the CAT score.

In the normal course, Viidhii Dwivedi of Kolkata, who completed her bachelor’s in dental surgery from the Dr Ram Manohar Lohia University in 2021, would have gone on to obtain a master’s in her field.

Instead, she is toiling away at a coaching institute preparing for the Common Admission Test (CAT), the gateway to the 20 Indian Institutes of Management and 77 other top business schools.

Dwivedi changed tracks when she heard from friends that the CAT score was no longer the overwhelming criterion for getting into a top B-school.

This struck a chord for Dwivedi; she does not much fancy CAT’s quantitative aptitude section, which tests mathematical ability.

It is the part engineers love.

“For a non-engineer like me, quantitative analysis is a major headache,” says Dwivedi.

Indeed, many top B-schools have changed the mix of the composite score, which is the average of all weightings.

They attach more value now to aspects such as academic record, bachelor’s degree marks, work experience, performance in the personal interview, as well as gender and academic diversity — resulting in a decline of the weighting to the CAT score.

The changes, while providing much-needed balm for Dwivedi’s headache, are also changing the texture of top B-school campuses.

This year, several new IIMs have more women in their post-graduate programme in management (PGP): Kashipur has 43 per cent women this year, compared to less than a third in 2019-2020, and Rohtak has more than 60 per cent, up from 50 per cent. 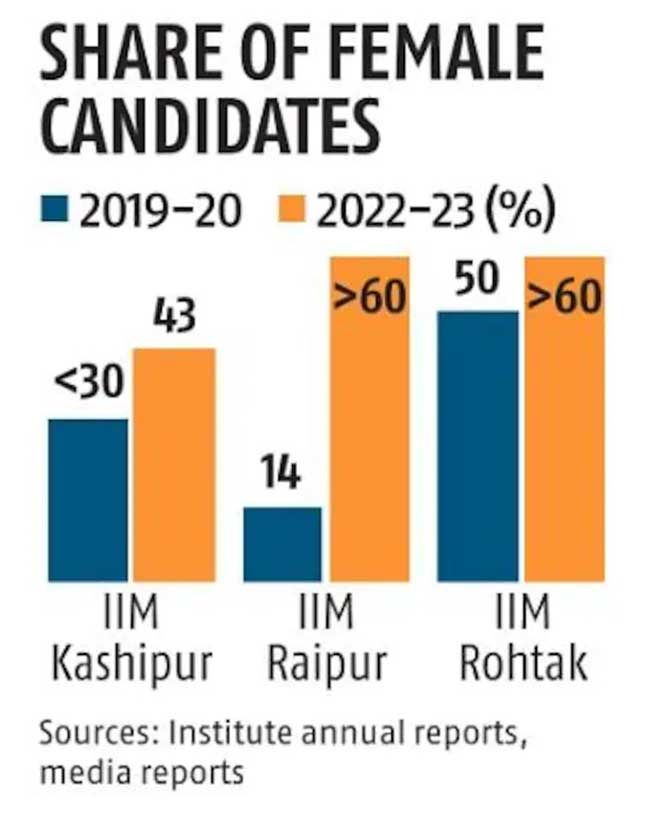 It is not just about gender diversity.

More than a third of this year’s PGP batch at IIM Ahmedabad is made up of non-engineers, up from less than 24 per cent in the 2020-22 batch.

Corporate lawyer Meesha Varshney, a first-year PGP student at IIM Ahmedabad, was encouraged by the growing emphasis on diversity to cast off the shadow of the ‘general engineer male’, which is a phenomenon big enough on campuses to become an acronym: GEM.

“The diversity factor definitely helped me not feel the burden of GEM,” says Varshney, who cracked CAT 2021 after spending four years with Cyril Amarchand Mangaldas, the well-known law firm.

IIM Calcutta and others have increased the points given to the ‘Academic Diversity’ parameter from two to four for non-engineering bachelor’s degree holders.

“We made the changes to enhance the gender mix, academic discipline, and other forms of diversity,” says Sandhya Bhatia, Dean of Programs at IIM Udaipur.

“This has helped students from diverse backgrounds to be part of our program and will improve classroom discussions, study group interactions, and class participation.”

Some IIMs are not limiting themselves to changing the composite scores.

IIM Kozhikode, which was the first to achieve gender parity back in 2013, introduced in 2019 the gender-based supernumerary concept, which reserves seats for women.

Soumya Roy, the institute’s Chairperson-Admissions, says: “Our focus on academic diversity has helped candidates from non-engineering backgrounds to make up a significant part of the cohort inducted every year.”

Curiously, coaching institutes do not see enough reason to change their methods in the wake of the changing composite scores.

Ramnath Kanakadandi, National CAT Course Director at the Triumphant Institute of Management Education, or T.I.M.E, says the changes have not reduced the difficulty level of the CAT exam.

“Our mode of coaching has not changed. It is just that IIMs have introduced what is being termed as ‘normalisation’ across sections of the paper to nullify undue advantage to someone scoring very high in a particular section, say quantitative aptitude, but not so high in other sections, such as logical reasoning,” he says.

Others, too, believe that for all the changes in the selection process, CAT continues to focus on aptitude skills rather than mere calculation speed. 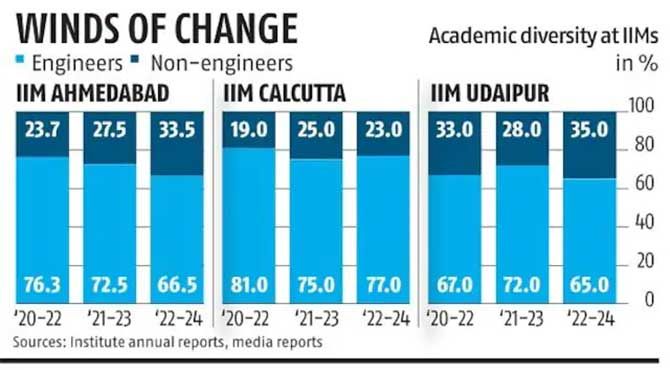 Meanwhile, as non-engineers like dentist Dwivedi of Kolkata choose not to pursue master’s in their field and, instead, take CAT, GEMs are feeling distraught.

Last month, he boarded a plane to the United States for a master’s in engineering.