Brody Jenner and Kaitlynn Carter’s relationship has mostly played out in the public eye, which has caused tension between the former partners. “The Hills: New Beginnings” stars were married in a beautiful ceremony in Indonesia, but their union was never made official in the United States. During an episode of “The Hills,” Kaitlynn admitted that the couple put off getting a marriage license in the states because they “had a lot of like financial things [they] needed to work out,” per People. Just over a year after their wedding, Brody and Kaitlynn called it quits in August 2019. “Brody Jenner and Kaitlynn Carter have decided to amicably separate,” they wrote in a joint statement at the time, per MTV News.

The “Keeping Up With the Kardashians” alum was blindsided by news of his ex’s next relationship. Kaitlynn made headlines as she had a tryst with Miley Cyrus. Both women were fresh out of being married and found solace together. “This past July, I went on vacation with a female friend; the next thing I knew, I was in love with her,” Kaitlynn wrote in a November 2019 essay for Elle. Brody found out through the headlines. “She got into a relationship with somebody and I didn’t find out until I saw it in the press,” he said on “The Hills” in May.

Nearly two years later, Kaitlynn has announced her pregnancy with boyfriend Kristopher Beck in an Instagram post. Once again, this caused more tension between the former couple.

Brody Jenner was upset he found out from headlines 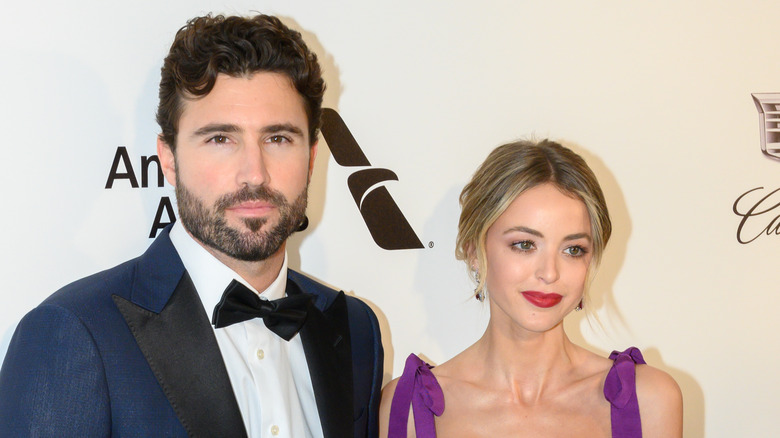 One major point of contention in Brody Jenner and Kaitlynn Carter’s relationship was having children. “How many years are we going to say this? There’s never going to be the perfect time to have kids, but I want to have them, so why not now?” Kaitlynn said on an episode of “The Hills: New Beginnings” that aired shortly after their abroad marriage (via Us Weekly). The reality TV star made it clear to her next beau that she wanted to be a mom. “We got to the conversation about having kids and where we stood about all of that really quickly,” Kaitlynn said in an episode of “The Hills” in June, per Us Weekly.

As the news circulated, Brody found out his ex-wife was expecting with Kristopher Beck. “I know that Kaitlynn’s pregnant … I don’t know from her,” he said on a July episode of “The Hills,” (via MTV News). During a confessional, Brody admitted it was difficult to find out indirectly. “Of course it’s hurtful to see all of these other people that seem to know that she’s pregnant and not me,” he said. “I don’t need to be the first one to know, but I think I should be in the top ten.”

Kaitlynn admitted that she deliberately kept Brody in the dark because it was an uncomfortable conversation. “It’s just a big thing to share with somebody,” she said. “It feels like one final nail in the coffin.”