Anyone who’s ever been booked into even a county jail knows that arrest reports are a matter of public record — which is why everyone ends up finding out which celebrities have done time behind bars (even if it was just for a few hours).

And while for many people getting arrested is a life-changing experience they don’t want to (or may never) repeat, sometimes getting arrested is part of everyday life… or at least, it happens to someone frequently enough. For prolific and well-known rapper and producer, Snoop Dogg, aka, Calvin Cordozar Broadus, Jr., getting arrested is almost a brand activity. He may not actually enjoy being in handcuffs or getting his prints taken, but there’s no doubt that Snoop Dogg knows a thing or two about getting arrested.

Getting arrested is a complicated matter, whether or not someone actually committed the crime they’re charged with. Here’s how many times the rapper has actually been charged. 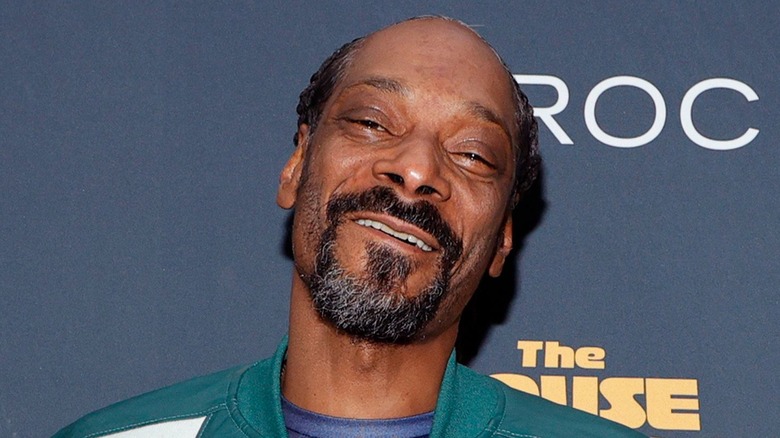 According to The Age, in 1990, at the age of 19, Snoop Dogg caught a cocaine possession charge, as well as a charge for allegedly being a member of L.A. gang the Crips. Drug possession, especially if you’re accused of trying to sell or distribute, can carry a hefty sentence, but it’s not the most intense charge Snoop Dogg has ever faced.

In 1993, the rapper and his bodyguard were each charged with first and second-degree murder, which stemmed from a drive-by shooting, per The Age. But they were acquitted of those charges in 1996, according to the Los Angeles Times. By the end of the ’90s and middle of the 2000s, Snoop Dogg would see six more arrests (several on drug and firearm possession), an implication in a rape case (which was later dropped), and both a ban from the United Kingdom and a denial of entry into Australia. He’d also marry his high school sweetheart, Shante Taylor, and father four children.

It looks like Snoop Dogg caught his last arrest to date in 2012, per Reuters, on a marijuana possession charge. And, despite his many run-ins with law enforcement, he is still one of the most well-known and wealthiest rappers the world over, with an estimated net worth of $150 million.

If you or anyone you know has been a victim of sexual assault, help is available. Visit the Rape, Abuse & Incest National Network website or contact RAINN’s National Helpline at 1-800-656-HOPE (4673).