“Keeping Up With The Kardashians” may have aired its last episode on June 10, 2021, but the public’s fascination with the family who redefined pop culture remains eternal. While the show covered plenty of big fashion moments (hello Met Gala!), fans really tuned in for the relationship drama. And between Kim Kardashian’s shocking split with ex-husband Kanye West, Kylie Jenner’s secret pregnancy, and Khloé Kardashian’s on-off relationship with NBA player Tristan Thompson, there’s been no shortage of breakups and makeups.

Younger sister Kendall Jenner is something of an outlier, because unlike her famous sisters, she hasn’t had a serious relationship and opts to keep her private business out of the spotlight. But that may be changing as of this writing. Per TMZ, the model first began stepping out with Phoenix Suns basketball player Devin Booker in 2020, and was even spotted on a road trip with the sports star in April.

The pair took the next step in their relationship by vacationing with fellow A-listers Justin and Hailey Bieber in September 2020 (via People). A source told the outlet that Booker and Kendall had been spending a lot of time together, further confirming what fans already suspected: that this was more than just a casual fling. Fast forward to June 15, 2021, and the couple celebrated a much bigger milestone than a joint vacation. Let’s take a look inside their relationship to date!

Do Kendall Jenner and Devin Booker have babies on the brain? 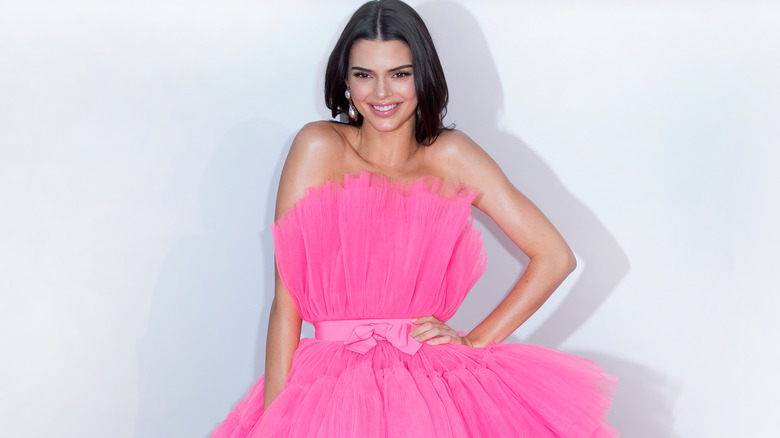 June 2021 officially marked a year since Kendall Jenner and Devin Booker have been together, and a source revealed to People that the reality star is “crazy” about her boyfriend. Not only that, but “her whole family loves Devin too.” In honor of one year together, both Kendall and Booker posted photo tributes on their respective Instagram Stories, including a shot of the model hugging her significant other, and a sunset photo in which Booker tagged Kendall and added “1,” along with a heart emoji (via Page Six). There may not have been any gushing social media captions, but sometimes actions speak louder than words.

An insider revealed in April 2021 that “this is the happiest Kendall has ever been in a relationship,” and she could be looking to kick things up a notch. For the reality star queen, that means … babies? “I’m the only one in my family who does not have a kid,” Kendall said on the latest season of “Keeping Up With The Kardashians” (via People). “Sometimes I just see [Kylie Jenner’s daughter] Stormi and [Khloé Kardashian’s daughter] True and [Kim Kardashian’s daughter] Chicago all playing together and I’m just like, ‘Ugh.’ I want kids, badly. Soon too.”

Given that those close to the couple have reported “they have something special going on,” could Booker be open to the idea of kids sooner rather than later?