‘My memory is as fresh as it was when I was a student in 1984.’
‘I had absolutely no problem while preparing for NEET.’ 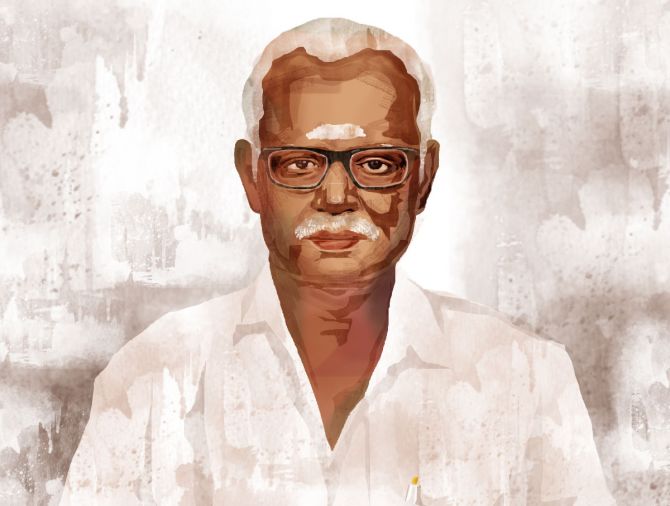 He must be among the oldest in the country who appeared for this test.

Rajyakkodi, a native of Ambattaiyanpatti village, near Madurai in Tamil Nadu, is a full time farmer.

“At that time the Tamil Nadu government conducted an entrance exam for those who wanted to study medicine. I appeared in that exam. The marks I got in that exam was not enough for a government medical college, but I did get admission in a private medical college,” Rajyakkodi recalls in a conversation with Rediff.com‘s A Ganesh Nadar.

“I did not attend that college as the capitation fees was very high and I could not afford it.”

He joined a course for a BSc in biology, but studied only for a year since his family was facing money problems.

As he belonged to a farmer’s family, he began doing agricultural work, got married and had two sons.

The elder son has a MCom degree and is now a builder. His younger son Vasudevan got admission to Cuddalore’s Government Medical College last year. His NEET score was 521.

“I read in the newspapers that a 63-year-old man in Odisha had cleared NEET last year and joined a medical college. My son had got into a medical college through the same entrance test. If my son could do it, why not me?” Rajyakkodi explains the reason for appearing for NEET.

“I have seen that students are scared to give the NEET exam. They get depressed before giving the exam and also after giving it. I wanted to let them know that this is nothing to be scared of,” Rajyakkodi adds.

“If a 55 year old like me could do it, why not them? I wanted to be an inspiration for them.”

There are, by the way, no age restrictions for taking the NEET.

As we grow older our memory power does tend to go down, doesn’t it? “Not for me,” Rajyakkodi hastens to add, “My memory is as fresh as it was when I was a student in 1984. I had absolutely no problem while preparing for NEET.” He used the study material his son had used last year.

When he went to take the NEET, “the guards at the entrance, the teachers inside, all of them wished me good luck.”

He found the physics and chemistry papers difficult, but the biology section was “very easy”. “I will get at least 460 marks,” he predicts.

His son, who is now in medical college, helped him prepare for NEET. He also did a lot of mock tests to help him know the format well. He studied for three hours every day.

The MBBS syllabus is vast, can he manage it at this age? “When you focus, you can understand, you can study. I will not have any problems,” he says.

If he gets into medical college, he will graduate when he is 62 years old. “After that, I can practice as long as I want.”

His family has been very supportive of him in this unique endeavour.

His 85-year-old father and 81-year-old mother are happy that their son is trying to do what their grandson has already done. His wife too has been totally supportive. “They all wanted me to appear for the exam,” he says.

It will not be only teenagers who await at this year’s NEET results, Rajyakkodi will also waiting.