Heart-throb peer to play Charles in Meghan movie: Lord Shaughnessy will star as his fellow blue blood in US film about duchess’ first year as a royal 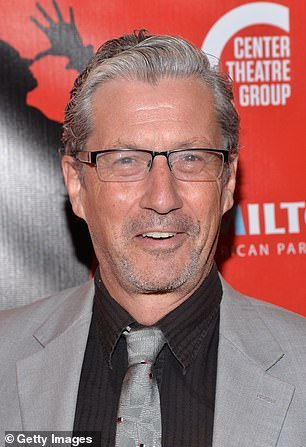 Prince Charles is to be portrayed in a new American TV drama about Meghan Markle by a fellow blue blood. Lord Shaughnessy, aka actor Charles Shaughnessy, is to play the heir to the throne in Harry & Meghan: Becoming Royal, which will cover Meghan’s first year as a duchess including her wedding.

Eton and Cambridge-educated Shaughnessy, 64, is based in America and formerly the heart-throb star of U.S. sitcom The Nanny. The sequel to Harry & Meghan: A Royal Romance was scripted by Scarlett Lacey, daughter of royal biographer Robert Lacey.

‘A personal surprise for me while doing research was to learn about the authentic connection between Meghan and Prince Charles,’ says Scarlett, ‘not just as people, but as rebels who see eye to eye on so many things.’

Banking heir Charlie Mills always seemed so sure of himself on Made In Chelsea, but he cut a confused figure in court yesterday when he faced a drink-driving charge.

The 25-year-old reality television star, whose family helped create the private bank Glyn, Mills & Co, changed his plea to guilty after Westminster Magistrates’ Court heard that he had called the police himself.

Mills dialled 101 after drunkenly falling out of his black two-litre Range Rover and hitting his head in the early hours of March 13.

He was stopped at 1.30am near Fulham’s swanky Hurlingham Club, of which he is a member.

Wearing a light grey double-breasted suit with white shirt and blue tie, Mills gave his address as Lound Hall in Nottinghamshire — a £4 million, 70-room country house, built in the Georgian style in the Thirties for mining heir Sir Harald Peake.

Initially, Mills pleaded not guilty to driving with 78 microgrammes of alcohol in 100 millilitres of breath. The legal limit is 35.

However, unimpressed District Judge Michael Snow suggested he reconsider his plea and Mills later switched it to guilty.

The court viewed police bodycam footage of his arrest and he could be heard explaining: ‘I fell out of the car with my phone and I really f***ing hurt my head there. I called your 101 people.’

When asked if he had been drinking, Mills replied: ‘Not an exceptional amount, not enough to be over,’ indicating he had consumed four gin and tonics up to two hours previously. However, after giving a roadside breath-test Mills can be heard on the footage saying: ‘Yeah, that’s way over. I’m going inside.’

He had driven to London to party with ‘nine to ten friends’ at the Bluebird Chelsea restaurant and then had more drinks at the Ritz.

Mills claimed his teetotal pal Alexander Nall-Cain, son and heir of former I’m A Celebrity contestant Lord Brocket, drove to the Ritz and then to Fulham.

He also argued it was unfair for the police to have sat and waited for him to drive off after they responded to his 101 call.

Judge Snow was not moved and fined Mills £1,100, with £85 costs, and ordered him to pay a £110 victim surcharge. He was also disqualified from driving for 18 months. 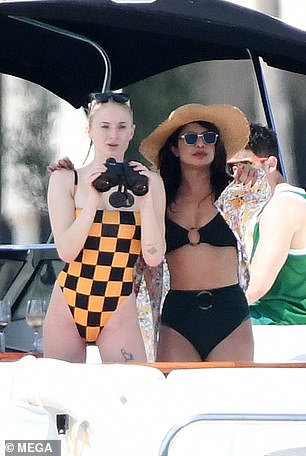 ‘Sansa’ is checking in with former Miss World Priyanka

But the precocious Turner, 23, who has starred as Sansa Stark in Game Of Thrones since the age of 14, left, looked entirely at ease beside the Bollywood icon yesterday aboard a yacht off Miami.

Thirty-six-year-old Priyanka favoured a black bikini and sun hat, while Sophie opted for a black-and-orange chequered swimsuit. Accompanying them were Priyanka’s husband, pop star Nick Jonas, 26, and his older brother and fellow band member, Joe, 29, to whom Sophie has been engaged since October 2017.

Why Sir Rod is hiding his nose from Penny… 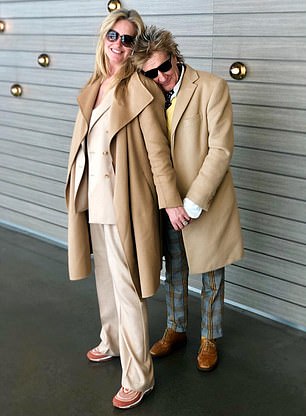 Sir Rod Stewart’s wife Penny Lancaster recently revealed the 74-year-old crooner prefers to pose on just one side for photographs because he’s self-conscious about a small lump on his nose from a football injury in his youth.

But no one was staring at his hooter this week when the couple, who have been married for 12 years and have two children together, looked as if they’d stepped off the pages of a fashion catalogue sporting matching beige coats.

Former model Penny, 48, shared this snap online as she accompanied Rod in Paris on his European promotional trip for his tour.

Is Suzi Quatro, the leather-clad rocker who topped the charts in the Seventies, miffed that she has been excluded from the Rock & Roll Hall Of Fame?

‘You can’t take the hall seriously if I’m not in there. They should get it right,’ says the Essex-based American. Quatro has enjoyed an acting sideline, even appearing in Midsomer Murders. ‘I got electrocuted,’ she recalls. ‘I guess that means my character is not returning.’ 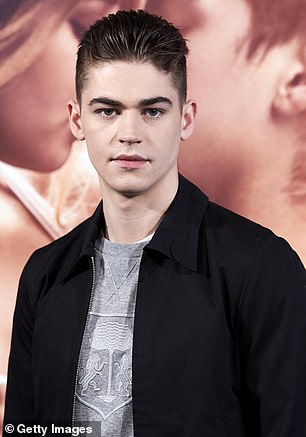 Destined for stardom from an early age, Hero Fiennes-Tiffin — son of director and producer Martha Fiennes and George Tiffin, and nephew of actors Ralph and Joseph Fiennes — is now starring in his first big-screen romantic lead.

The 21-year-old, who was at a screening this week in Madrid of his new film, After, had an early start in Hollywood playing 11-year-old Tom Riddle in the Harry Potter films, the younger version of the villain Lord Voldemort, who was played by his uncle Ralph, inset.

‘My family being in the industry definitely had an effect,’ he admits. ‘I wouldn’t have considered acting an option if I weren’t in a family that does it.’

The 40-year-old, who has two children, Winston, ten, and Eugene, six, with his actress ex-wife Billie Piper says: ‘[Kids] aren’t encouraged to compete these days, are they? I’m more old-school than would be appreciated nowadays.

‘There is definitely a winner at Fifa 19 on the computer — I encourage competition with my boys, I like it; it makes them more boyish.’ 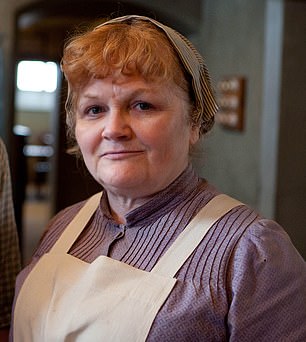 After years toiling below stairs as the formidable cook Mrs Patmore in Downton Abbey, actress Lesley Nicol jumped at the chance to play a matriarch in Beecham House, ITV’s new India-set period drama. ‘I thought I was unusual casting because I never get to go upstairs,’ says Nicol, who plays Henrietta Beecham, the mother of Tom Bateman’s dashing former soldier.

‘It’s been a long time coming.’

Will Sir Paul McCartney’s lost novel ever see the light of day? Beatles biographer Hunter Davies recalls the occasion the Mop Top borrowed his typewriter to bash out his first work of fiction. ‘He had a holiday with us in 1968 in Portugal and he arrived out of the blue with his girlfriend, Linda,’ Davies tells me at the launch of his book Happy Old Me at the Groucho. ‘While he was with us, he borrowed my typewriter and started secretly writing a novel — but he wouldn’t let me see it! I’ve later said: “Did you ever finish that?” And he said: “I’ve put it in the safe.” So he’s written something. And if it ever gets published, know that it was written on my typewriter!’