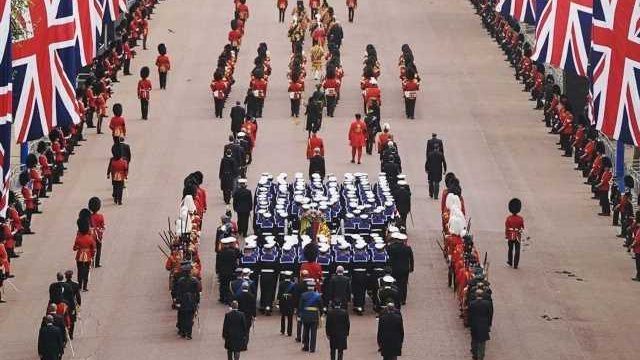 On the day the late British monarch was laid to rest, it is confirmed that the Metropolitan Police made 67 arrests as mourners flooded the streets of London.

AceShowbiz -Cops detained 67 people in London amid the funeral of Queen Elizabeth. The state funeral that followed on Monday (19.09.22), after the late monarch passed away at the age of 96 on September 8 following a record-breaking 70-year reign, became the “biggest security event” in history, with around 15,000 officers and 1,500 soldiers protecting mourners on the streets of London.

67 arrests, however, have been made by the Metropolitan Police on the day, with Scotland Yard deputy Dame Lynne Owens explaining that it had been the force’s “honour and privilege” to serve King Charles, who acceded to the throne the moment his mother died.

In a tweet, she said, “It has been an honour and a privilege for @metpoliceuk, supported by other forces and partners, to serve His Majesty the King in the period of mourning and to escort Her Majesty the Queen in her final journey. Officers and staff worked tirelessly with the encouragement of the public.”

“We start this week knowing the challenges we still face but with determination to build on the confidence communities have this past week shown in us – essential to cutting crime and keeping people safe.”

Several thousand offices from all forces of the country were deployed to London for the historic event – which saw more than 500 world leaders descend upon the capital city – and were on alert for bomb threats and attacks, with more than 22 miles of barriers lining the streets of London to keep the public safe.

Security measures for the Her Late Majesty’s funeral are said to have surpassed those put in place for her Platinum Jubilee back in June and those of the London 2012 Olympics.

In the days leading up to the state funeral, members of the public were able to visit Queen Elizabeth lying-in-state at Westminster Hall and 28-year-old Muhammaed Khan was charged with a public order offence after allegedly leaving the queue to approach the coffin, whilst Mark Hague, 52, was fined £120 after mourners in the queue alleged he had stated his intentions to tell the monarch she was “not really dead.”

It is estimated that 250,000 people filed past the coffin over the four days she spent lying-in-state at the historic building, despite having to face queues of up to 30 hours.