Bridgerton fans are anxious to hear a Season 2 announcement for the hit Netflix costume drama. Unfortunately, Phoebe Dynevor’s quotes about Bridgerton Season 2 aren’t a good sign if you want the show back ASAP. Although Netflix has yet to officially pick up a second season of the show, it’s likely the streaming giant will make the announcement soon. But filming in the pandemic, as well as the source material for the show, could be an obstacle for Daphne Bridgerton’s character having as much to do with the next season.

As Dynevor talked with Deadline about the possibilities of Season 2, she revealed she doesn’t know the details. “I genuinely have no idea what they’re going to do with the second season, but I imagine if they’re following the books, then it would be Anthony’s journey,” said Dynevor. “I’m sure Daphne will end up getting involved. But yeah, I do wonder what it looks like. I’m excited to find out.”

Based on Julia Quinn’s novels, Bridgerton Season 2 would likely switch its focus to Anthony Bridgerton’s character, so Daphne will probably take a back seat.

But Dynevor’s main concern is that the ongoing pandemic could stall Season 2 production. “We just managed to finish. It was amazing,” she said of the production for Season 1, as they wrapped in February 2020, before the halt of production in the United Kingdom. “I can’t imagine how it would be possible to film under these circumstances," Dynevor admitted.

She continued, explaining why Bridgerton would be particularly difficult to film right now: "There are so many extras and so many crew members, and it’s a very intimate show. It just baffles me how we would film it under COVID rules unless there was a vaccine beforehand.” Although she’s worried about the timing, Deadline points out that Production Weekly has suggested the filming could begin as soon as March. 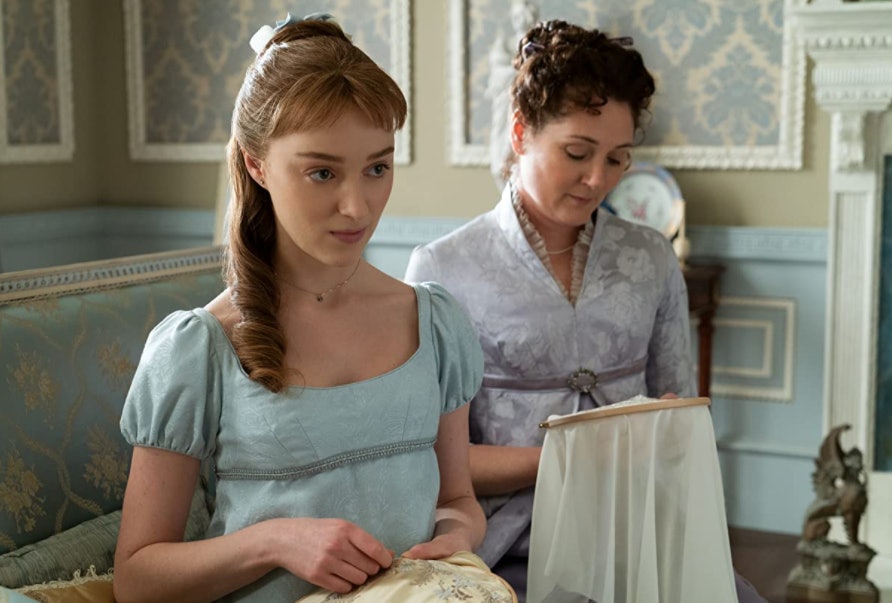 But Dynevor says her experience filming TV Land’s show Younger during the pandemic was strange to get used to. “When I was filming, it was masks on in rehearsals. So you don’t take them off until you say action. Or at least we didn’t," she said. "It was a really strange experience. I didn’t see my character’s new boyfriend’s face until we were filming a scene together, which was really bizarre."

With the love scenes in Bridgerton not allowing for distancing, Dynevor’s point seems valid. She and her costar Regé-Jean Page, who played her love interest Simon Basset, had to undergo a vigorous six weeks of training for their sex scenes, including help from an intimacy coordinator.

Whatever the case, it’s likely that Netflix will make its announcement about the show’s future before the end of January. Since there’s no confirmation yet, though, there’s no official premiere date for Season 2 as of publication. Fans can only hope that Dyvenor is wrong about when filming could begin, though it’s hard to say with the pandemic and safety should definitely be the main concern.