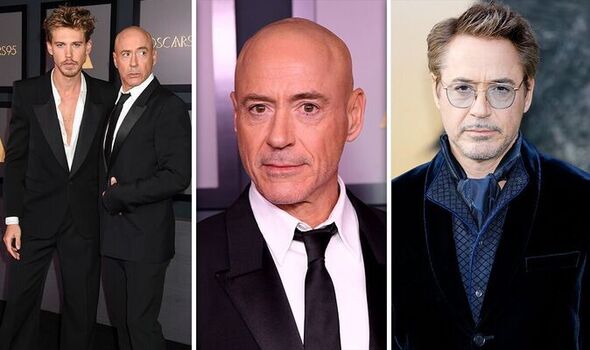 Robert turned heads as he attended the Academy’s 13th Annual Governors Awards ceremony on Saturday with his wife Susan, 45.

The star sported a totally bald head as he attended the event held in Fairmont Century Plaza in Los Angeles, California.

Robert has always rocked thick, dark short hair, which has barely changed over the years.

However, the trademark look his fans recognise from Iron Man is gone after the star allowed his children to shave it all off.

The star looked dapper as he posed on the red carpet in a black suit, white shirt and tie at the event held in Los Angeles.

The actor’s children Exton, 10, and Avri, eight, were given permission to take clippers to his hair last month.

Robert Downey Jr struck a confident pose as he stood next to Austin Butler, 31, on the red carpet

The Ironman star posed beside the Elvis actor, who smouldered in a black suit and white shirt that he left open.

Robert Downey Jr was also joined by his wife Susan, 45, for the star-studded event

The A-lister’s wife looked stunning as she donned a black maxi dress with layered ruffles and spaghetti straps.

The Hollywood actor is preparing for a role in upcoming HBO limited series The Sympathiser, which will follow a half-French, half-Vietnamese man who served as a spy for Communist forces during the Vietnam War.

The Marvel favourite is credited for helping introduce a whole new generation to the world of superheroes.