Chote nawab, Taimur Ali Khan Pataudi, if you haven’t noticed, is already Bollywood royalty. From fans thronging to catch a glimpse of him to paparazzi waiting odd hours to click his many moods, Baby Tai sure knows how to keep his admirers amused and entertained. Be it with his adorable face or his guffaws when he sees his friends from the press – he is an absolute favourite and can easily be the poster boy of the toddler club in B-Town. And don’t even get us started on the way he says ‘Hi’ and ‘Bye’ on insistence. Matlab hadh hoti hai. Actually not sure if there’s any after the doll that has been made after him. (Also Read: [HQ Pics] Taimur keeps the paparazzi entertained with a tongue-out expression and some cute antics)

And now, as it turns out, he has another fan. And it’s none other than Parineeti Chopra. The actress who was recently spotted at the airport, ahead of cousin and actress Priyanka’s Chopra’s wedding in Jodhpur, thinks Baby Tai is the right person to twin with and we can see why she would say that. She took to Instagram to share a collage of Taimur and her where she can be seen wearing the same Ramones t-shirt that Taimur did and voila! She also wrote, ‘Couldn’t help posting’ on her IG stories and we’re not blaming her. She the post here. (Also Read: 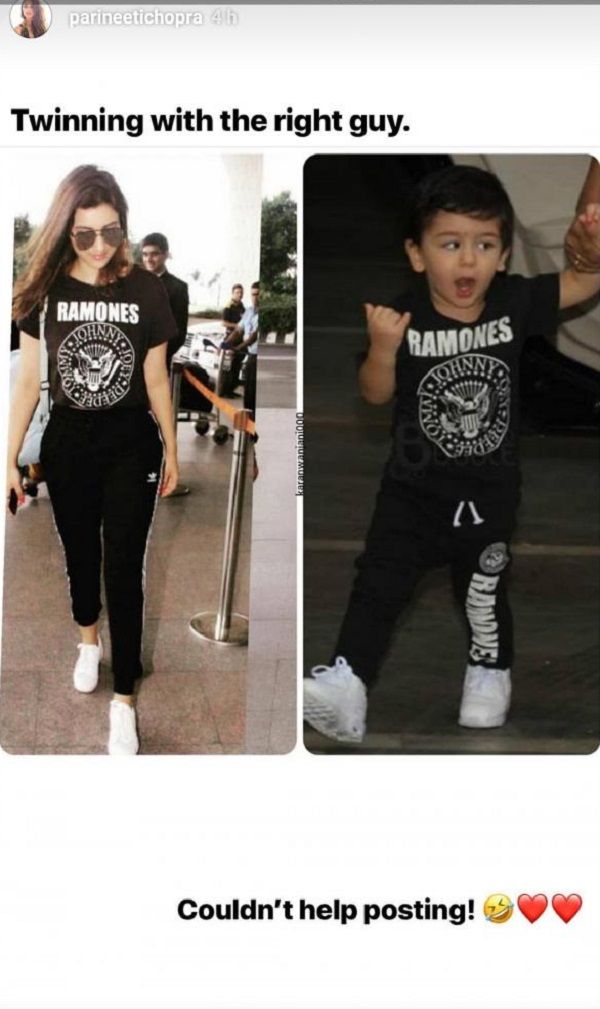 We are actually waiting to see Pari dance and go total dhamaal at PeeCee’s wedding amidst other shaadi shenanigans. On the work front, she will next be seen in Jabariya Jodi alongside Sidharth Malhotra and Sandeep Aur Pinky Faraar with Arjun Kapoor.

US: Woman fired after backlash from racist park confrontation

Rupee slips 8 paise to 75.74 against US dollar in early trade

Experts explain: Can doctrine of frustration be enforced during a force majeure event?
Celebrity News

Chrissy Teigen Reveals She’s Having Surgery: ‘I’m Getting My Boobs Out!’
We and our partners use cookies on this site to improve our service, perform analytics, personalize advertising, measure advertising performance, and remember website preferences.Ok