Serampore MP Kalyan Banerjee told reporters after the meeting with Shah that the home minister listened to their complaints and assured that "there will be no violence". 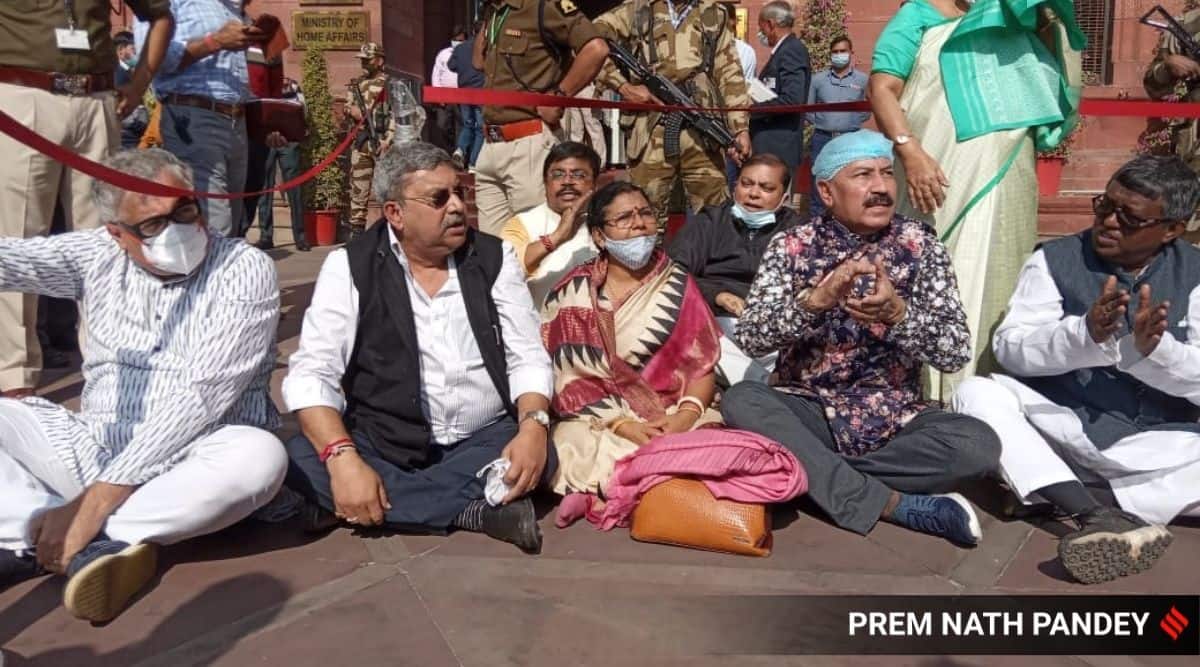 Alleging “partisan action” by the Tripura Police in cases of violence against its leaders in the state, a group of Trinamool Congress MPs Monday met Union Minister Amit Shah at his residence, demanding that the Centre “should look into the matter”.

While the meeting eventually took place at 4 pm, around 15 TMC MPs protested outside North Block through the day claiming that Shah has refused to meet them. Before boarding her flight to the capital, West Bengal Chief Minister and TMC supremo Mamata Banejree had also announced that she will meet the protesting MPs in solidarity.

However, a little before 4 pm, the party announced that Shah had given them an appointment at his Krishna Menon Marg residence, following which they ended the protest. At the meeting, the MPs — including Saugata Roy, Derek O’Brien, Sukhendu Sekhar Roy, and Dola Sen — submitted a memorandum highlighting several instances of violence against TMC leaders in Tripura since August 2 when the car in which the party’s national general secretary Abhishek Banerjee was travelling was attacked.

“We are aware that law and order is a state subject, but if a party or government in any state violates Supreme Court orders and takes away the constitutional rights of opposition party to campaign in a local election, the Centre should look into the matter. The violence against TMC leaders and workers in Tripura by BJP workers and partisan action by the Tripura Police must stop,” stated the memorandum.

“Surely, it cannot be a crime for a political party to campaign in any state. Before West Bengal assembly election, a large number of BJP leaders and workers had descended on the state. They were allowed to campaign freely and peacefully,” it added.

The memorandum also listed Sunday night’s violence in Agartala at the house of the party’s state steering committee convenor Subal Bhowmick and at the east Agartala police station where Saayoni Ghosh, the party’s West Bengal youth wing chief, was arrested. This was the immediate trigger for the party to depute its MPs to Delhi.

Serampore MP Kalyan Banerjee told reporters after the meeting with Shah that the home minister listened to their complaints and assured that “there will be no violence”.

“Now it remains to be seen whether his words get reflected in reality. He also said that he spoke to Tripura CM Biplab Deb on Sunday evening,” he said.

Civic polls will be held in Tripura on November 25.