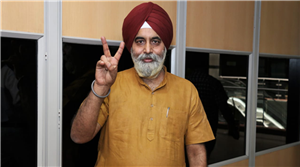 The BJP and SAD had fought the 2017 corporation elections as allies — while the BJP won 179 seats, the SAD bagged five.. Last year, the SAD had pulled out of the NDA in protest against the Centre’s new farm laws. The Shiromani Akali Dal (SAD) councillor from GTB Nagar, Raja Iqbal Singh, is set to be the mayor of North Delhi even though his party has severed its alliance with the BJP over the three farm laws. The BJP is in power in all three civic bodies — North, East and South.

The BJP and SAD had fought the 2017 corporation elections as allies — while the BJP won 179 seats, the SAD bagged five.

Last year, the SAD had pulled out of the National Democratic Alliance in protest against the Centre’s new farm laws. Thereafter, the party decided to give up all posts it had jointly held with the BJP in any organisation, including Delhi’s municipal corporations.

However, Singh, who was chairperson of Civil Lines Zone at the time, continued to hold the post, and was on Tuesday nominated as the North Delhi mayor.

Singh was served a notice by the SAD when he had not resigned from the post of chairperson.

SAD Delhi unit president Harmeet Singh Kalka said: “Since the Shiromani Gurdwara Parbandhak Committee elections were in progress at the time and model code was being enforced, no action was taken against him at the time. And now there is no point taking any action because he has made his intentions clear.”

“The BJP is playing a game. They have poached other SAD leaders such as Paramjeet Singh Rana as well,” he claimed.

Rana had also not quit the post of chairperson of the Special Law and General Purpose Committee.

When contacted, Iqbal Singh said he has now joined BJP, but did not comment further.

Meanwhile, Delhi BJP president Adesh Gupta on Tuesday announced the names of Mukesh Suryan and Shyam Sunder Aggarwal as mayors of South and East Delhi corporations respectively. They are expected to be elected unopposed.

This is the last term of mayors and other elected representatives in the current term as Delhi will witness MCD polls next year.