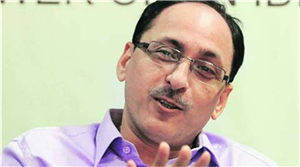 Maharashtra Chief Secretary Sitaram Kunte, however, told The Indian Express that he will not be able to comply with the ED summons as he was “busy with cabinet meetings”. The Enforcement Directorate (ED) has summoned Maharashtra Chief Secretary Sitaram Kunte, asking him to appear before it on Thursday in connection with the money laundering probe against the jailed former state Home Minister Anil Deshmukh.

Kunte, however, told The Indian Express that he will not be able to comply with the ED summons as he was “busy with cabinet meetings”.

The ED has summoned Kunte to record his statements pertaining to the alleged transfer and postings of police officers in the state.

The agency is probing allegations of corruption and bribery against Deshmukh, claiming that he had collected money from bar owners in the city through the now dismissed cop Sachin Waze. Deshmukh is also being probed for allegations of transfer and postings of police officers in lieu of money.

Deshmukh was arrested by ED on November 2 and is currently in judicial custody.

The Central Bureau of Investigation (CBI), too, had earlier served a notice to Kunte along with Director General of Police (DGP) Sanjay Pandey to appear before it in connection with the FIR registered by the agency against the NCP leader.

The Maharashtra government then approached the Bombay High Court seeking directions to stay the proceedings arising out of the CBI probe and raised grievances against summons issued by the agency to Kunte and Pandey, claiming that its “highest officers” were being harassed.

The Bombay HC is presently hearing the matter.

The state’s Maharashtra Vikas Aghadi (MVA) government had recently sent a proposal to the Centre seeking an extension for Kunte, who is slated to retire on November 30.