The imam of Nakhoda mosque, one of the oldest and the biggest mosques in West Bengal, had earlier requested people to stay indoors during the Bakrid celebrations. 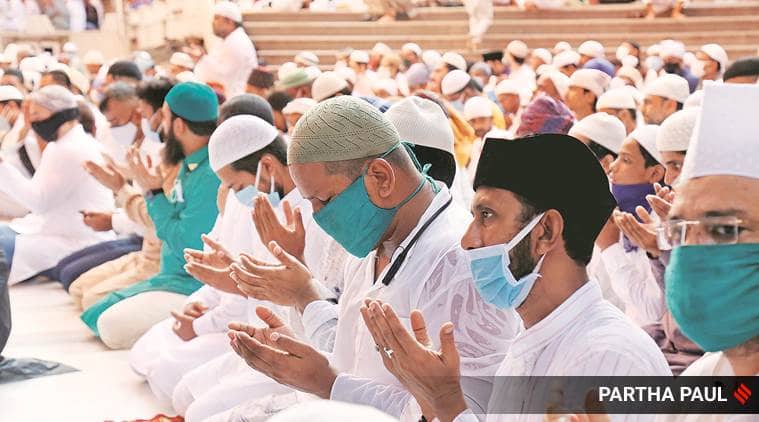 Eid al-Adha or Bakrid was celebrated in a subdued manner in the state as people offered prayers at mosques in small groups and homes by following precautions against the coronavirus. Devotees skipped hugging and shaking hands after prayers at mosques to contain the virus spread.

The imam of Nakhoda mosque, one of the oldest and the biggest mosques in West Bengal, had earlier requested people to stay indoors during the Bakrid celebrations.

“We followed government guidelines on social distancing. People visited the mosque and offered prayers in small groups at a time… We are happy that everything went peaceful,” said Mohammed Safi, kazmi imam of Nakhoda Masjid.

Governor Jagdeep Dhankhar extended his Eid greetings to people. “The festival inspires us to inculcate empathy, peace and universal brotherhood. Given the COVID challenge, need to follow safety protocols — wearing masks, practising physical distancing in celebration,” the governor said in a tweet.

As per guidelines issued by the government, mass gatherings were prohibited. The authorities made elaborate arrangements to sanitise the mosque premises and thermal screening of the faithful. “I have not witnessed anything like this in my entire life. Eid namaz has to be said ina masjid. But the situation at present is such that people, especially senior citizens, have been asked to stay indoors. I prayed with my sons and grandsons. It was a painful by inevitable decision,” said S K Jamshed Ali (76), a former businessman Topsia in south Kolkata.

At MG Road in Tollygunge, people offered prayers from the safety of their house as the imam recited special verses from the mosque.

Several loudspeakers, installed at a various places in the mosque, ensured that the verses were audible in the neighbourhood.

“There are particular verses that need to be recited on Eid. Thanks to this initiative, we could follow them from our homes,” said Ahmed Hosain, a businessman. Chairman of the Bengal Imam’s Association Mohammed Yahia lauded people for following government instructions.

He said all 26,000 mosque committees in the state have been asked to allow 25 faithfuls to enter their premises during morning prayers, barring a few located in containment zones.

Every year, people in large numbers gather at Red Road in central Kolkata for prayers. But CM Banerjee had appealed people to pray indoors.