Transport minister Laxman Savadi said the bus is capable of running 200-250 kilometres in a single charge with the AC on in the city’s regular traffic conditions. 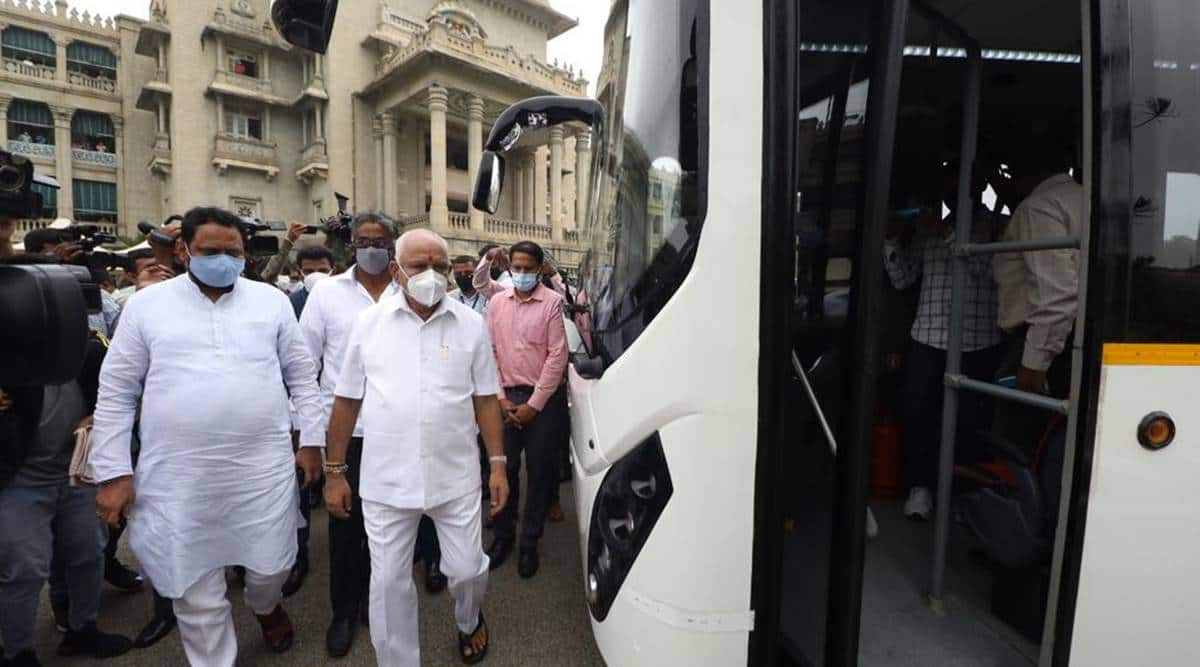 After a gap of six years, the Bangalore Metropolitan Transport Corporation (BMTC) Wednesday began trial runs for an electric bus in the city. The 12-meter long AC e-bus has been provided by a Hyderabad-based company.

The trials, which had to be put on hold due to operation and financial issues, resumed after an inspection by Chief Minister B S Yediyurappa and Deputy CM Laxman Savadi. The bus, with sandbags in place of passengers, is being tested on different routes in Bengaluru.

“The outcomes of this will help us finalise and optimise the operation of electric buses in the city,” BMTC Managing Director C Shikha told indianexpress.com. According to BMTC officials, the bus will be driven across key roads, including Mathikere, Nandini Layout, Nelamangala, Vidyaranyapura, Kadugodi, Sarjapura, Kempegowda International Airport, and Bannerghatta.

Earlier during the day, Savadi, who is also in charge of the Transport Department, took a ride on the bus along with top officials representing related departments from Shantinagar depot to Vidhana Soudha. He said that the bus is capable of running 200-250 kilometres in a single charge with the AC on in traffic conditions of the city. “With 35 seats (including the driver), the bus can operate with consistent load of 100-125 people,” Savadi said.

However, BMTC officials added that the performance of the bus will be assessed in terms of battery charging, carrying capacity, and its response in heavy-traffic roads, among other indicators.

While the bus is now being charged at BMTC Depot 7 (Subashnagar), the corporation also plans to add more charging points in key depots across other routes of the city, once services begin officially. “Trail runs will continue, with other companies also expected to hand over buses to us in the coming days. A final decision on which bus would ply officially on Bengaluru roads will be taken only after a thorough assessment,” the official added.

Meanwhile, the state government has directed BMTC to prepare an action plan to lease 300 e-buses under the Faster Adoption and Manufacturing of Hybrid and Electric Vehicles in India (FAME)-II scheme of the central government. While the central department of heavy industries (DHI) is providing a subsidy of Rs 55 lakh per bus, the state government has allocated Rs 33.33 lakh per bus for the operation of e-buses.

The first such trial run of an e-bus had been conducted in 2014, when a China-based company provided a bus to BMTC.