The group began reading the Indian Constitution when they were ushered out of the venue by the police citing 'no permission' given for this. A group of protesters in Bengaluru has alleged police brutality after their all-night Constitution-reading vigil was stalled within an hour on Saturday evening. Around 25 people had stayed back in front of Sir Puttana Chetty Town Hall in Bengaluru after a three-hour anti-CAA protest concluded with an attendance of nearly 2,000 people.

The group began reading the Indian Constitution when they were ushered out of the venue by the police citing ‘no permission’ given for the same.

“The organisers of the three-hour protest who approached us were given prior permission. However, the group that planned to stay at the venue till 10 pm was not granted the same as they failed to sign an undertaking to not breach the peace,” Chetan Singh Rathore, Deputy Commissioner of Police (Bengaluru Central) told Indianexpress.com

On the other hand, the group of people who assembled to read the Constitution accused the police of ‘conflicting’ their right to assemble peacefully for the same prior to observing Republic Day.

“A group of like-minded citizens, including myself, had got together at Town Hall premises for a reading session of the Indian Constitution. However, the police dragged one of us – while peacefully reading Article 19 (Freedom of Speech and Expression) – off the venue after which he(Senthil, a school teacher) was detained at SJ Park police station for one and a half hours,” Itisha, an Indian Air Force (IAF) veteran alleged.

“The police dragged me to the station as I was reading the Indian Constitution in front of Town Hall. I had joined the reading to show solidarity with my fellow sisterhood who had chosen to stay back after the protests to read the Constitution,” Senthil said after being released from the station on Saturday.

Further questioning police action, another person at the venue claimed that permission for Constitution-reading was sought from the DCP, two days prior to the event on January 22.

“We had requested the DCP for permission mentioning a maximum of 50 people would take part in reading and discussing the Indian Constituion in a meaningful way to observe Republic Day. However, the DCP asked us to sign an undertaking with a surety of Rs 1 lakh which we did, mentioning ‘subject to judicial review.’ This led to the DCP revoking the permission” another person said.


He further accused the police of filing charges against the applicant under section 107 of the Code of Criminal Procedure (CrPC) which “conflicts with right to peacefully assemble and read the Constitution.”

When contacted, a police officer from SJ Park police station confirmed a preventive action report (PAR) was filed against the applicant. “The PAR was filed under CrPC section 107 for assembling in the area even though permission was denied earlier. A detailed inquiry into what led to these actions is now underway,” the police officer said. 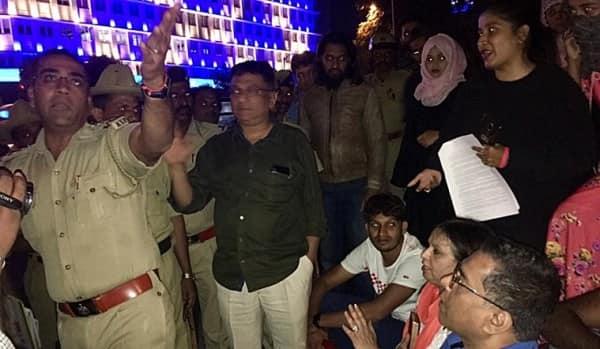 However, the group under the banner ‘Citizens Upholding Constitution’ Sunday confirmed that the issue will be taken to court. “How can people reading the Constitution be accused of breaching the peace. Police dragging citizens from public places is something dreadful and we condemn this,” a member of the group said.

On Sunday, anti-CAA protests continued in the city under various banners including the DSS Joint Action Forum and SDPI. While the DSS-led march was held from City Railway Station to Freedom Park, the SDPI-led protests took place in Thanisandra Main Road.

The all-women protest which began as a 24-hour event in Frazer Town on Thursday was later extended to 48 hours which concluded on Saturday evening, with the organisers claiming an attendance of more than 1000 women over the days.

For all the latest Bangalore News, download Indian Express App

Chandigarh: Three dead, 2 injured after fire breaks out at PG in Sector 32

Dance Plus 5 Grand Finale: Mithun Da recalls fond memories from first film with Dharmendra | Bollywood Life
We and our partners use cookies on this site to improve our service, perform analytics, personalize advertising, measure advertising performance, and remember website preferences.Ok