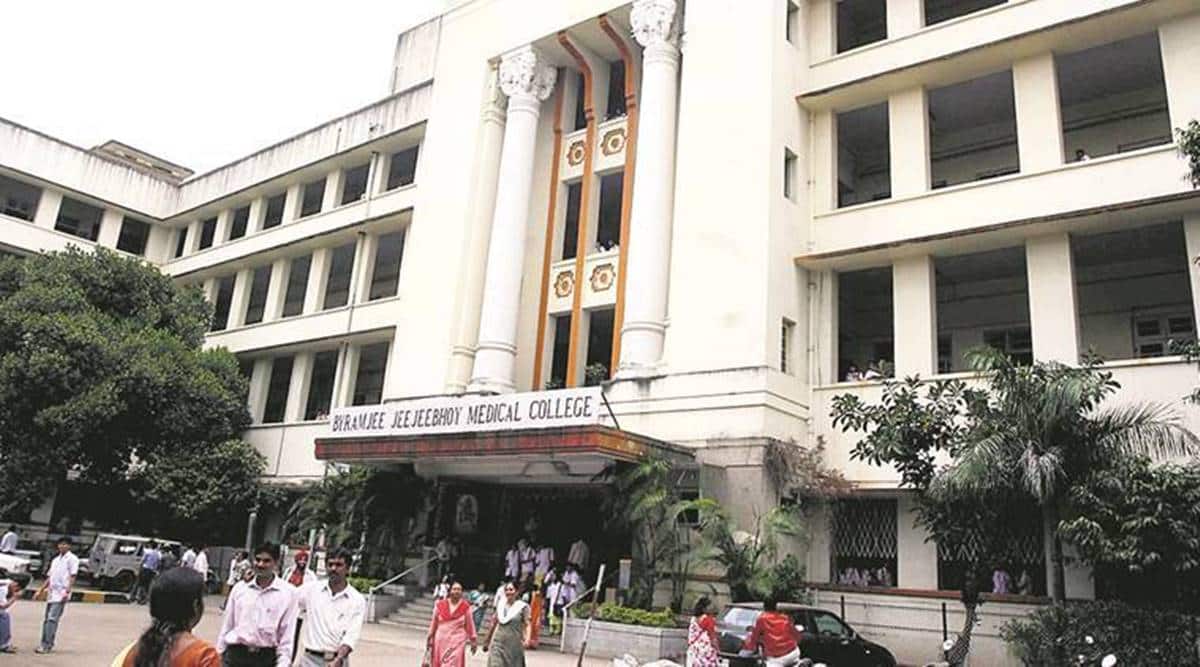 As the state-run BJ Medical College (BJMC) marks its 75th foundation day on June 23, several former deans of the prestigious college in Pune said a close working relationship between medical education and public health staff was essential for better patient care. There was also a need to start super-specialty courses apart from stepping up security for doctors, said Dr M A Phadke, a former dean of BJMC, director of medical education and research and vice-chancellor of Maharashtra University of Health Sciences, told The Indian Express.

It was in 1946 on June 23 that BJMC was founded to replace the erstwhile BJ Medical School. Due to the Covid-19 pandemic, the platinum jubilee celebrations will be low key, said BJMC dean Dr Murlidhar Tambe.

Sassoon General Hospitals, to which BJMC is affiliated, has successfully treated over eight lakh patients to date. Dr Tambe also said at BJMC, projects like Bombay blood group, sleep biochemical studies, ‘Sassoon hospital syndrome’, prevention of mother to child transmission of HIV among others were some of the international publications that had contributed to understanding these medical problems. The BJMC has several patents to its credit, thereby establishing its presence in different international medical universities and journals.

Dr Tambe further said the college had undertaken different collaborative research projects with Johns Hopkins University, US, since 2000 and a clinical trial unit had been established.

Former deans of BJMC told The Indian Express that there was also a need to start new super-specialty courses. Dr Phadke said courses such as MD forensics, degree and postgraudate courses in nursing, physiotherapy and occupational therapy should be introduced. “We need to start fellowships and introduce an honorary system,” Dr Phadke added.

As many as 1,700 students are on the campus with more than 2,000 staff members, including 268 faculties, according to the BJMC website. Dr Arun Jamkar, also a former dean of BJMC, who also served as vice-chancellor of MUHS, recalled their efforts during the H1N1 pandemic (2009) and German Bakery blast. Pune was the epicentre of the outbreak and BJMC served as a tertiary-level facility for critical care of swine flu patients. Dr Jamkar talked about how they had immediately set aside isolation intensive care units after the first swine flu death in the city.

Dr DB Kadam, the then professor and head of department of medicine, and his team developed a novel Pune management protocol for swine flu, which was accepted across the country. “During the German Bakery blast, our ambulances went to the spot and, in that one night, we operated upon 40 injured persons,” Dr Jamkar told The Indian Express. The BJMC later developed a comprehensive disaster management plan for the city of Pune.

Dr P M Bulakh, a former deputy dean of BJMC, said the hospital should be at par with corporate facilities with sufficient paramedical and technical staff. While this was one of the largest government hospitals, adequate care should also be given to ensure good private rooms for patients with all facilities, Dr Bulakh added.

Dr Aarti Kinikar, who chairs the Pune paediatric Covid-19 task force and heads the department of paediatrics at BJMC, told The Indian Express that efforts were underway to ensure that a super-specialty course could be developed for every subject. “We are working towards getting recognised as an autonomous medical institute apart from a host of other plans,” she said, adding that there was also a need to set up an emergency helipad and to expand organ transplant services.

Dr Ajay Chandanwale, joint director of medical education and research, who also headed BJMC, said they were hopeful towards greater autonomy for Sassoon. ”I expect heart, limb transplant with kidney and liver. Super-specialty courses should be started and Sassoon should be the apex centre in medical research,” Dr Chandawale added.