Governed by a bureaucracy, which has the powers but is largely indifferent, and councillors who cannot see beyond their vote-banks, it has fallen upon the judiciary to safeguard the character of the city. Meet the just and vigilant conscience-keepers of Chandigarh. Governed by itinerant bureaucrats, who don’t have a substantial stay or stake in the city to take hard policy decisions, along with a municipal corporation that is myopic, the Union Territory of Chandigarh, has for long been pining for a political overseer, in the form of a legislature. But of late, this desire has been in wane. Reason: It has found an even more formidable institution to safeguard its interests.

The Punjab and Haryana High Court is doing a yeoman service to the city by keeping an eagle eye on the issues that beset it. From traffic trouble to law and order, from the thirsty Sukhna Lake to stray dogs, there is scarcely an issue facing the residents on which the worthy judges haven’t taken a stand.

Often senior officers of the administration have to present themselves in courtrooms for rendering assistance or for explaining their failures.

“There needs to be a surgical strike (against civic problems). I cannot sit as a mute spectator and let Chandigarh be ruined likes this,” Justice Amit Rawal observed during a recent hearing of a case related to the city. “Why should court be monitoring such issues? We are here for other purposes like serving justice. It has been years since any (officer) has been convicted (for non-compliance) of court orders. Let it begin from my court”. 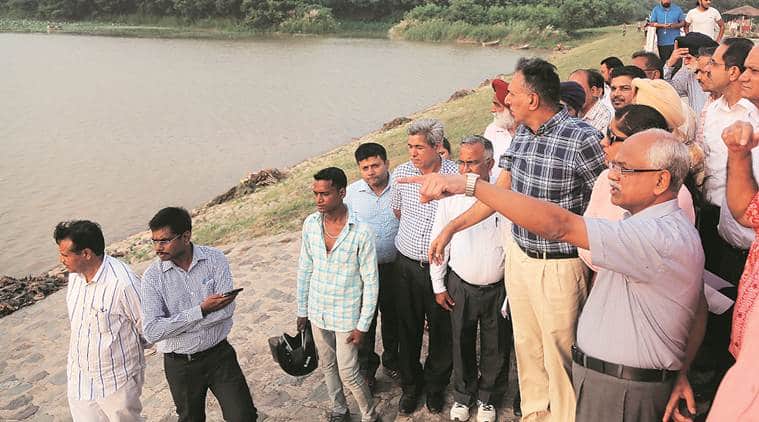 Such strictures passed in an open court are a norm when it comes to Chandigarh, a reflection not only of the judicial zeal, but also of its passion for City Beautiful. No wonder a senior lawyer, appearing for the administration, recently griped that the UT Administration and its actions are always under the microscope, while Punjab and Haryana go scot-free.

“Every judge wants to see Chandigarh as a model city. They are residents of the city and most of them have grown up here, so it is obvious for them to act when they feel something is not right. There may be some instances of judicial overreach but you cannot ignore the results on ground,” said a lawyer, who has appeared in some of the cases.

In many cases, the High Court’s intervention has been nothing but beneficial for the administration. According to a senior official in the administration, many of the proposals or requisitions, which had been pending for months, have moved forward only after court cases. “Chandigarh Administration cannot force the union government to do anything but the courts have the power to do so. When the court directly issues the notice to the Centre, there is a sense of both, authority and urgency,” said the officer.

The worthy judges not only act on Public Interest Litigations to take up matters concerning the city, but they are also quick to don the cap of a crusader by taking up issues suo motu. In many cases, where a person or a group may have approached the court seeking redressal of a specific or personal grievance, the courts have extended the ambit of the petitions to drive policy and bring about change, sometimes merely through oral observations.

TO THE RESCUE OF PU

In September 2016, the then Vice-Chancellor Arun Kumar Grover, while addressing the senate, said the Panjab University will close down soon if its revised budget was not approved. The statement was concern enough for Justice Mahesh Grover to write a reference to then acting Chief Justice for initiation of a suo motu case. In October 2016, the university told the High Court that it can face a deficit of Rs 277.72 crore if its revised budget was not approved. While the UGC challenged one of the High Court orders before the Supreme Court, the case ensured that the funds kept flowing, in installments, to the PU exchequer. Ultimately, the Centre had to increase its share towards PU from the annual Rs 198 crore of 2016 to Rs 207.80 crore in 2017. Punjab government too was made to increase its grant from Rs 20 crore to Rs 27 crore. However, the case is still pending with the university saying that it now has sufficient resources to meet the current requirements but there has to be more flow of money from the Centre and Punjab.

SAVIOURS OF THE SUKHNA

Sukhna Lake is a rain-fed lake located at a walking distance from the High Court premises. In 2009, the High Court initiated a suo motu case to restore the glory of the lake after expressing concern over its depleting water levels and constructions in its catchment area. While the constructions were soon banned in the catchment area, the issue pertaining to the increasing silt at the lake and its declining water level, have continued to date more than 10 years on. The court recently directed the authorities to ensure that no sewage water goes into the lake, but the issue now again has gone back to square one with the focus on catchment area concerns. Meanwhile, a good monsoon of 2018 and a continual rain has kept the concerns regarding the silting of the lake at bay.

In December 2017, a single bench of the High Court extended the scope of writ petition of a private citizen while asking all Punjab, Haryana and Chandigarh, regarding the availability of health facilities for poor and needy patients. Soon, the bench started monitoring the health infrastructure in Chandigarh and asserted that the burden of patient load at PGIMER be reduced by upgradation of facilities at other hospitals. In pursuance to the court orders, the GMSH-16 has almost operationalised its ICU. As per the timeline given before the court, an 80-bed hospital at Maloya is to be completed by December 2020. The 100-bed hospital in Sector 48 is almost ready and the the 193-bed Trauma and Emergency Block at GMCH-32 is also expected to be completed this year.

In May 2017, another single bench while acting on a petition filed by a peon of the High Court, took note of the problems surrounding the allotment and conditions of all government accommodations in the city. There are more than 13,775 government houses in Chandigarh, on which around Rs 79,92,58,844 have been spent on civil works in the past five years. The court is currently asking the administration to look into the possibility of demolishing the single-storey houses for better land use. Suggesting that “multi-storied buildings with stilt parking and lifts” should be raised after demolishing the “obsolete” old houses in a phased manner, the High Court had said that it will end the “rat race” among the allottees for ground floor accommodations. Since the initiation of the case, the policy for the allotment has undergone a major change and a survey of the existing houses has also been undertaken for effective maintenance.

The most important case pertaining to everyday activities of the residents is the one which has hogged headlines since the beginning – it has a strange origin but has kept officials, especially the traffic cops, on a tight leash. The case was initiated by a single bench, following a habeas corpus petition filed by a Punjab resident, now it has in its ambit a monitoring mechanism regarding the repair of cycle tracks and pedestrian paths, their misuse by car drivers, the encroachment of roadside spaces by residents, the encroachment of markets by shopkeepers, the use and misuse of parking spaces, lane driving, zebra crossings and more.

Justice Amol Rattan Singh hears a case that raised quite a furor in the city was when he recently ordered demolition of all the encroachments by residents, in the form of gardens, outside the walls of their houses. While the order was aimed at creating more spaces for parking in Chandigarh, it was soon stayed by a division bench, which asked the administration to first come up with a parking policy. Most of the senior officers in the administration, municipal corporation and also the SSP Traffic have been summoned to the court in the case on multiple occasions.

Over a lakh challans have been issued by the traffic cops within a year against some of the offences being monitored in the case. While the Court has appreciated action on more than one occasion, it has also felt the need to order that the action must continue.

Thanks to judicial intervention, the international airport is finally taking off. The case filed by Mohali Industries Association on Chandigarh International Airport infrastructure has been going on for more than three years. Since December 2015, the court has been continuously monitoring the progress of works, including that of the runaway at the airport, and is ensuring that the ‘international’ tag does not merely remain on papers. Thanks to the stern strictures from the Court of Justice SS Saron, the airport has made an effective progress since 2015. It will soon become operational 24×7.

In December 2017, the court took suo motu note of the exemption given to women of Chandigarh from wearing helmets. A division bench remarked, “How does gender come in? Is there any difference in the skull of men and women? There cannot be an exception”. The administration soon came out with a notification making helmet mandatory for all women who do not wear turban. However, due to political pressure, the Ministry of Home Affairs soon overruled the administration’s notification. Since then, the case has not come up for hearing before the court but the final decision continues to remain pending in the suo motu PIL.

Acting on a PIL filed by advocate HC Arora regarding a series of snatchings last year, the High Court division bench of Justice Ajay Kumar Mittal and Anupinder Singh Grewal observed, “This was earlier unheard of. We are not worried about the statistics. Stringent action needs to be taken. We are not interested in your data. There should not be such incidents. Are the police people or lawyers waiting for someone from their family (to be a victim) and then act?”. Soon, the results were also visible. The case is still pending in the High Court and the centre has been asked to respond to a UT proposal on making snatchings a non-bailable offence in Chandigarh. Last year, the High Court also took a strong stand against modification of bikes by removal of silencers and forced the police to act against noisy bikes.

Besides the important cases, the issues relating to the vendors placement and displacement, loud music being played at marriage parties, the facilities for taking care for injured stray animals, holding of marriage functions inside the Rock Garden are all pending before different benches of the High Court.

A Group of Justin Bieber Fans Got A Big Surprise From The Singer Today!

Lily Collins and Ashley Park Make One Seriously Stylish Pair of Friends
We and our partners use cookies on this site to improve our service, perform analytics, personalize advertising, measure advertising performance, and remember website preferences.Ok