Located in the middle of the rehabilitation colony, the sole dispensary which looks after a population of 58,404, has a space of eight cramped rooms on the ground floor of one of the buildings in the colony. 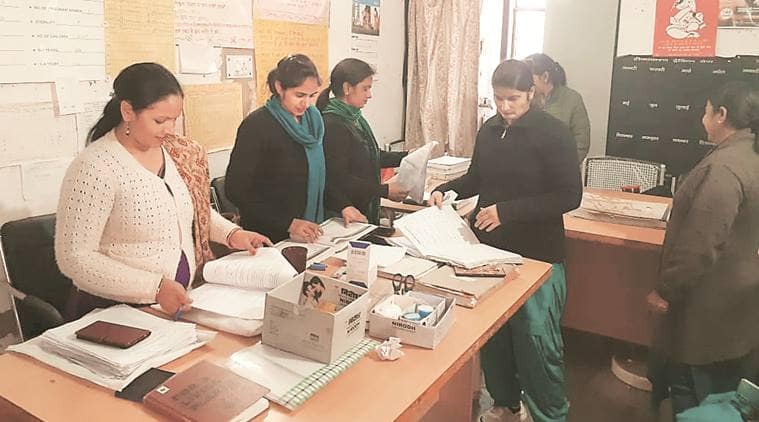 “The poor ANS has stitches on her forehead. In fact, this has happened many times. People dump garbage from the upper floors onto the dispensary below. Or during rain and thunder storms, things get unhinged and fall upon us. Once a ladder fell from the top floor onto the patients lined up outside the dispensary,” claimed Sushma, a Lady Health Visitor stationed at the colony in Dhanas.

Located in the middle of the rehabilitation colony, the sole dispensary which looks after a population of 58,404, has a space of eight cramped rooms on the ground floor of one of the buildings in the colony. Each building, which was constructed in 2013 by the Chandigarh Housing Board to rehabilitate Economically Weaker Section (EWS) families, consists four floors, with sixteen cramped flats for sixteen families on each floor. The buildings have flats placed opposite each other, with a staircase running down the middle to form a makeshift shared courtyard. 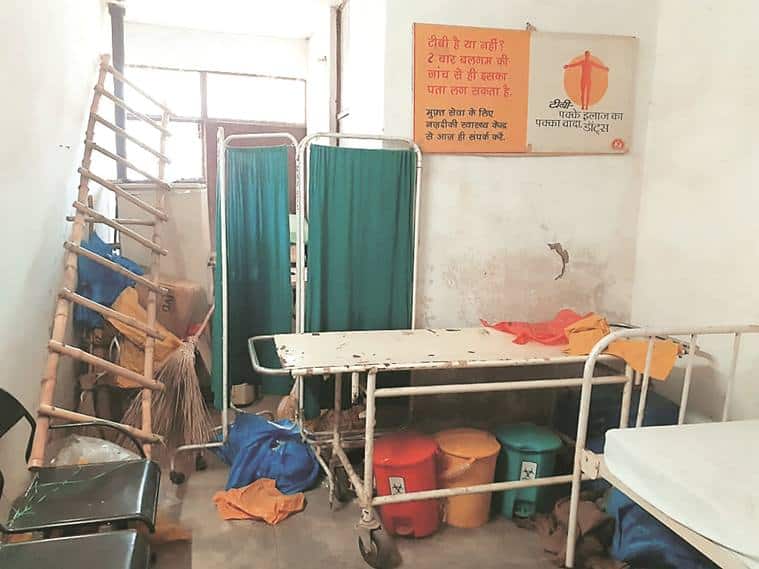 “I have been at this dispensary since it was established at the colony in 2013. Since then the colony has more occupants and the services provided here have increased extensively, but we have to carry out all this work from within the same eight room cramped space,” said Dr Ashok Kumar, general physician and the sole permanent doctor posted at the dispensary along with an AYUSH doctor, Dr Praveen, who often aids Kumar during peak OPD hours.

Kumar claims that on an average day, he looks after more than 200 patients in his OPD, which he personally keeps a record of through hand written registries. “We would buy a computer, but amidst all the machinery for blood tests and other screenings, along with the sitting space for all medical workers stationed here, I don’t know where I will find the space to place computers,” claimed Kumar.

Apart from the OPD room, a lab testing room, an injection room, a pharmacy and a few other rooms dedicated to ANM’s working on reproductive and child health, Kumar now also has to find space to initiate other medical services that are mandated to be provided at HWCs under the National Health Mission. Along from diagnosing and treating communicable diseases and caring for child and reproductive health under a myriad of national health schemes, HWCs are expected to expand their services to emergency and trauma care, oral health care and even mental health care.

“They want us to have a separate space for dental care which requires a lot of equipment and space to treat patients, but we try to do our best. But now they have asked us to begin with psychiatric care also which is a whole other ball game,” said Kumar. “There are so many drug and alcohol abusers here. I have seen children aged 13 taking smack and other hard drugs. They all need dedicated psychiatric care, but as of now we can only try and identify them and refer them to GMSH 16,” added Dr Praveen.

Dr G Dewan, Director Health Services and AYUSH service, claims that there are many other dispensaries in Dhanas area which can cater to the population and further stated that he has asked urban planning to look for more space for the dispensaries. However, Kumar alleged that he has placed the demand for more space with authorities since 2015 to no avail. “That is why I have accepted this as an inconvenience that is here to stay,” added Kumar.

More than inconveniencing the doctors, who are worried about ensuring sanitary standards and ceasing the spread of infections between patients who seek treatment at the dispensary and the health care providers, the patients they treat are exposed to various health hazards as well.

“On days that we have check ups for pregnant women, more than 50 line up outside our small room. We can’t even offer them chairs to sit on because there is no space inside the room,” said Dhandevi, an ANM at the dispensary. The ANM alleged that often the pregnant women line up outside in the heat and faint from exhaustion. Many others get drenched in dirty garbage or water dropped by the residents living on the three floors above.

In fact, garbage and stagnated slush is strewn everywhere around the dispensary and the whole colony, increasing the risk of communicable diseases such as Malaria. “What do we do? If we collect the garbage and keep it in one place no one comes to take it. If they do collect it, they ask for 70 rupees. They say they don’t get paid by the government so we have to pay them,” said Ranjeet Kaur, a resident who lives close to the dispensary, adding, “Most of us have no livelihood abd are barely able to make ends meet. So we would rather just dump the garbage outside our home than pay a monthly fee.”

Back at the dispensary, Dr Praveen pointed to the freshly painted exterior in a bright yellow colour, labelled with the words ‘Health and Wellness Centre’. “They painted the exterior a week ago. It looks quite vibrant and attractive, but we have given up on asking for the work that needs to be put into the interior,” he says.