On the probe into the violence when a masked mob attacked students and teachers, a crime branch team of the Delhi Police visited the JNU and questioned Pankaj Mishra and Vasker Vijay Mech besides Ghosh. 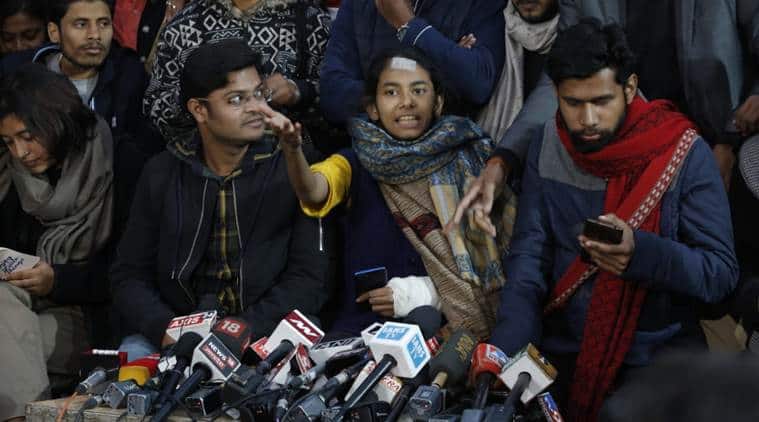 The Delhi Police Monday questioned three JNU students, including JNUSU president Aishe Ghosh, in connection with the January 5 violence on campus, even as students and teachers boycotted classes on the opening day of the winter semester amid a standoff over the hostel fee hike issue.

A delegation of teachers of the Jawaharlal Nehru University (JNU) knocked the doors of the Human Resources Development(HRD) ministry again claiming that the situation is not conducive for conducting academic activities and that students are scared of returning to the campus.

As the JNU students union(JNUSU) continued to boycott the registration for the winter semester demanding a complete roll back of the hostel fee hike, the university administration claimed that of the nearly 8,500 students more than 5,000 have registered.

In a statement, HRD Minister Ramesh Pokhriyal said the fee-related matter has been sorted out and that the continuation of the agitation by students was not justified.

On the probe into the violence when a masked mob attacked students and teachers, a crime branch team of the Delhi Police visited the JNU and questioned Pankaj Mishra and Vasker Vijay Mech besides Ghosh.

Ghosh is among the seven out of the total nine suspects, who are from Left-leaning student organisations while two suspects are from the RSS-affiliated Akhil Bharatiya Vidyarthi Parishad (ABVP). Mishra has, however, claimed that he is not affiliated to either sides.

“They sought my version of events. They asked me about my complaint. I also asked why they did not register an FIR on the complaint filed by me,” Ghosh said.

Responding to a plea filed by JNU professors, the Delhi Police also informed the Delhi High Court that it has asked the university administration to preserve and hand over the CCTV footage of the violence but has not yet received any response from the university.

The police said it has also written to WhatsApp to preserve data, including messages, pictures, videos and phone numbers of members, of two groups — ‘Unity Against Left’ and ‘Friends of RSS’ — on the social networking platform on which the attack was allegedly coordinated.

According to the police, Akshat Awasthi and Rohit Shah, who featured in a sting operation conducted by a TV news channel, have also been served with notices to join the investigation. The ABVP has denied that the two are their members.

Hitting out at the left-leaning student organisation and the Congress’ NSUI, the ABVP at a press conference alleged that they were hand-in-glove in the January 5 violence. They also said the attack was the fallout of a pre-planned conspiracy by rival unions.

The ABVP also released eight videos in support of their claims and demanded a detailed investigation.

The classes for winter semester in the varsity were scheduled to start on Monday.

However, both students and teachers boycotted the classes amid stand-off between the administration over the fee-hike issue. They also remained firm on their demand to sack Vice-Chancellor M Jagadesh Kumar.

The JNU administration had also issued an advisory to teachers to resume their classes in the interest of students. However, the teachers refused to heed the advice.

At a meeting with the HRD ministry officials, a five-member delegation of JNU Teachers Association (JNUTA) said the atmosphere was not conducive to conduct academic activities and claimed students are scared of coming back to campus.

“We do not feel secure on campus, atmosphere not conducive for academic activities. Students who left campus after violence scared to return, how can we resume teaching,” JNUTA President D K Lobiyal told the ministry officials.

Prashant Kumar, a PhD student at the varsity, said the masters and graduate course students have decided to boycott classes.

“The vice-chancellor has written to various centres to frame the time-table but there has been no development. The classes did not start today but might begin in a day or two,” Kumar said.

A student from the School of Social Sciences, who did not wish to be named, said, “We first want the issues to be sorted, only then can we focus on our studies. Just to make a fresh beginning, we cannot forget the past”.

According to Professor Hari Ram Mishra of the School of Sanskrit and Indic Studies, some students attended classes but many of them are still not back in campus.

“The classes should commence in a proper way in the next couple of days,” he said.