The FIR was lodged against trustee of the hospital, Khaleed Patel (Phasiwala), who is the son of late Congress leader Mohammed Phasiwala and resides in South Africa, and others. 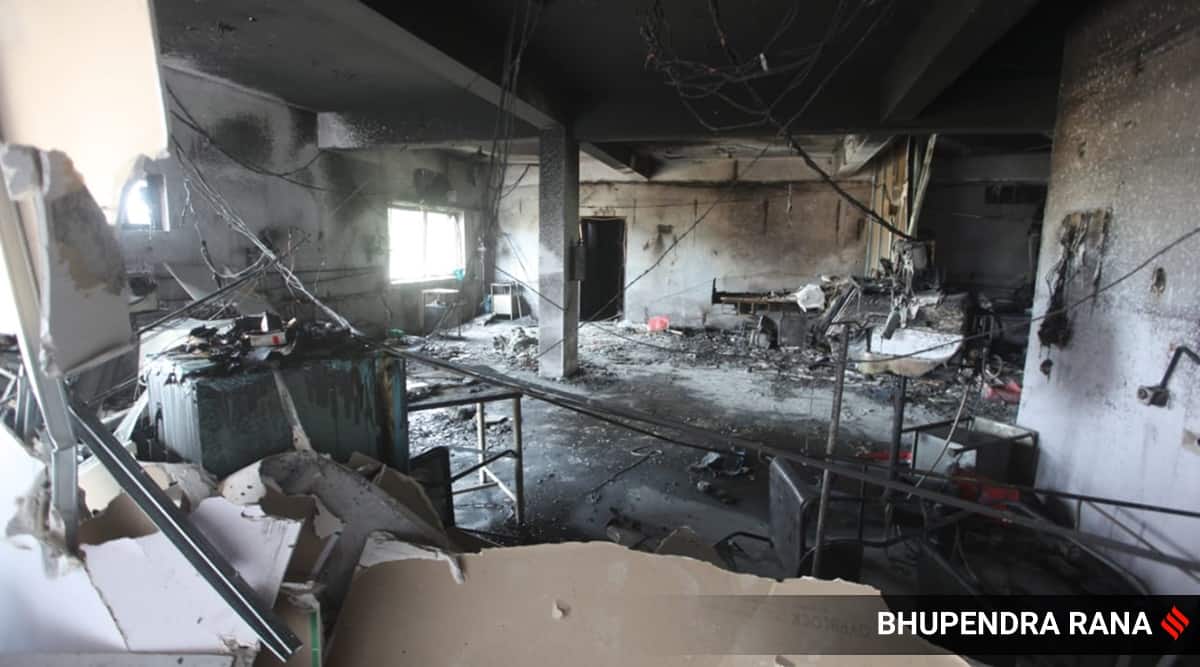 Police have lodged an FIR against the trustee of Welfare Hospital Bharuch for running a Covid hospital without fire NOC or required permission in their new building where a fire on May 1 killed 18, including two nurses. The authorities had given permission to start Covid hospital in the old building on the same campus.

The FIR was lodged against trustee of the hospital, Khaleed Patel (Phasiwala), who is the son of late Congress leader Mohammed Phasiwala and resides in South Africa, and others.

Following the fire incident, Sohel Dalal, a resident of Sherpura village near Jambusar, and a trustee of the hospital, lodged a complaint with Bharuch B Division police station, on May 1. Police took help from the Forensic Science Laboratory, fire department, Bharuch Ankleshwar Urban Developmnet Authority (BAUDA), and chief officer of Bharuch Nagar Palika.

The FIR says, “District Collector of Bharuch gave permission to Welfare Hospital, Bharuch, to start Covid hospital in the old building… An MoU was done between incharge CDHO of Bharuch, Dr SR Patel, and medical officer of Welfare Hospital, Dr Suketu Dave. The hospital authorities, instead of starting hospital in the old building, started the Covid hospital in the neighbouring new building on the same campus. When fire broke out on May 1 midnight, there were 42 patients undergoing Covid treatment in the hospital… A total of 18 persons, including two nurses, died…”

The FIR also said that when the Nagar Palika teams audited the old building of the hospital on April 30, 2021, the authorities did not share details about the Covid hospital to the team. “The regional fire officer in his findings mentioned that there were four fire extinguishers in the Covid hospital… Other fire safety measures such as water tank with sprinkler system, emergency exit, etc., were also not there. No fire audit was carried out in the new building. The FSL officials submitted to the police that fire was triggered by a spark in the electric equipment or ventilator… that caught on to sanitiser bottles, plastic dustbin, bed-sheets and medicines kept in the ward,” it adds.

The FIR further also mentions statements given by nurse Charmi Gohil (19) who survived the blaze. “She alongwith another nurse Madhvi were present in the ICU-1… the patients were asleep. Farega Khatoon, another nurse, came in from neighbouring ward to change her old hand gloves. She took out her old gloves and dropped it in the dustbin near the ventilator of bed no. 5. She found that the cable attached to the ventilator was loose and there was a spark. Before she could examine furhter, her shoe caught fire that spread on to her PPE suit… Madhvi rushed to save her but her PPE also caught fire… The power supply was disrupted, due to fire,” the FIR adds.

Bharuch District Superintendent of police RV Chudasma said, “We have registered offence based on the findings of experts. We will now collect evidences against the accused and will arrest them.”

Senior Congress leader of Bharuch, Nazu Fadwala, said, “The trustees are family members of late Mohammed Phasiwala, who was a senior Congress leader of Bharuch. After death of Mohammedbhai who was running this hospital, his son Salim Patel, who was in London came down and took charge… But Salim died in 2020 during the first wave of Covid… Now, his younger brother Khaleed Patel (Phasiwala), who resides in Swaziland, Southern Africa, looks after hospital works… The Phasiwala family is known for their humanitarian work in Bharuch… We don’t know the reason for shifting the Covid facility to the new building…”