The chain was formed to oppose the Citizenship Amendment Act, National Population Register, and the proposed NRC, with people waving the Tricolour and reading the Preamble aloud. Waving the Indian national flag, thousands — from children to octogenarians — gathered in Kolkata to form a human chain on Republic Day, to oppose the Citizenship Amendment Act (CAA), National Population Register (NPR) and the proposed National Register of Citizens (NRC).

People from different communities held hands to form an 11-km chain, stretching from the north to the south of the city. Reading aloud the Preamble, participants pledged to protect the Constitution of the country and uphold the nation’s plurality.

Starting from Shyam Bazaar in the north to Golpark in the southern part of the city, people came out to form the chain around noon, raising slogans of ‘Saare Jahan Se Achha, Hindustan Hamara’ and ‘Vande Mataram’. Organised by the United Interfaith Foundation India (UIFI), comprising leaders of different religious communities in the state, the event saw an “overwhelming response”.

“As January 26 is an important day for our Constitution, we wanted to uphold and celebrate everything that it talks about. From freedom of religion, free speech to equality and fraternity, we pledge to protect it at all costs,” UIFI general secretary Satnam Ahluwalia told indianexpress.com. “For 72 years, there has been harmony and unity among all in this nation and we think there is no reason to disturb that peace and coexistence,” Ahluwalia said.

With people of all ages pouring in, the organisers said the chain was a beautiful example of what the Constitution stands for. “We saw an overwhelming response, the turnout was way more than we expected. As we demanded only 10 minutes from everyone, at some places, so many people turned up that we formed not one but multiple lines,” Ahluwalia added. 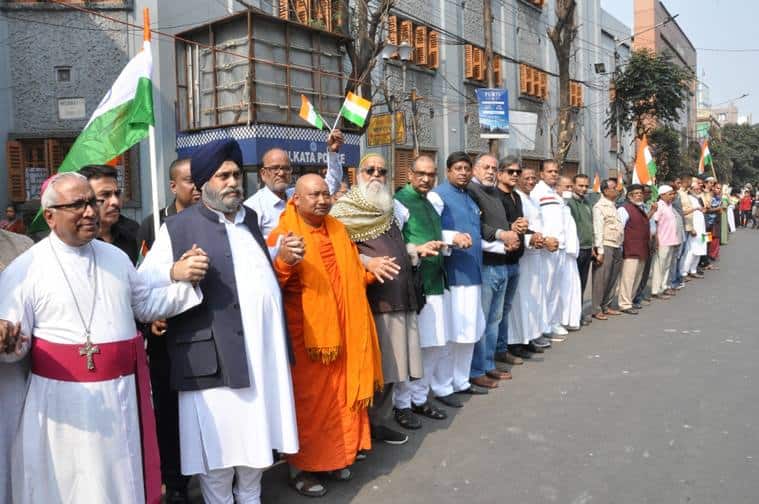 “Usually on Republic Day, people sit back and watch the parade on television. But this year, it’s heartwarming to see everyone come out and stand together. We will not allow anyone to break this unity in diversity. Segregating us on the basis of religion is a direct attack on the ethos of India, and we the people will oppose it,” said Sayoni Ghosh, a first-year student of Calcutta University. Ghosh and friends had joined the protest in Shyam Bazaar.

Although the organisers called for people to hold hands for just 10 minutes, as more enthusiastic participants kept coming in, the formation continued beyond the stipulated time. However, the organisers claimed, they dispersed everyone quickly to not hamper traffic, and assembled only on the sides of the main streets.