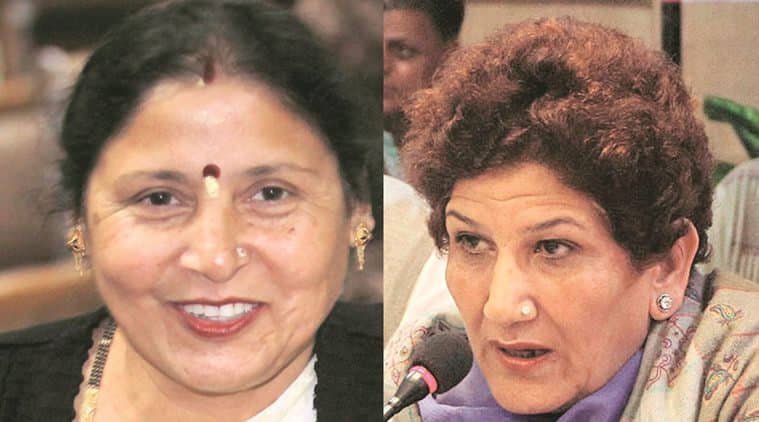 With just a few days left for the Mayoral polls, BJP councillors Raj Bala Malik and Heera Negi are turning out to be the front-runners in the race for the coveted post. Earlier, four candidates from BJP were in the fray. As BJP has majority councillors in the house, it will be a BJP vs BJP contest, yet again. Incumbent Mayor Rajesh Kalia’s term will be ending this month. This time the seat is reserved for a woman candidate.

Malik switched to the BJP from the Congress in 2014. She was mayor from the Congress party in 2012. During her stint as mayor, Raj Bala Malik was known for her tough dealing and straightforward approach. It was during her tenure that the project of Multi level parking in Sector 17 was approved.

Heera Negi has been giving a close contest to Malik. However, Tandon’s group is not agreeing on her name as she has been quite vocal in voicing her resentment against the group when she lost the mayoral polls in 2015 and the finance and contract committee elections as well.

In 2015, Heera Negi was pitted against Congress candidate Poonam Sharma but the former lost the mayor polls. In 2016, a statement from the BJP stated that fielding Negi was a mistake. Negi had then complained to the high command, saying that she had been maligned. In 2017, in the elections of the Finance and Contract Committee, Negi lost despite the BJP being in majority. At the time, she had been alleged that those councillors holding allegiance to Tandon were responsible for her loss.

A mayor holds a one year term in Chandigarh. A mayor is elected from among the elected representatives in the General House. To become a mayor, a candidate needs 14 votes out of 27. The nine nominated councillors do not have voting rights. One vote is that of Member of Parliament, Kirron Kher, who is the ex-officio member of the House. Of the 26 elected councillors, the BJP has a majority in the Chandigarh Municipal Corporation with 20 councillors. There are five Congress councillors while one is from SAD, which is in an alliance with the BJP.

Mumbai cops to patrol on horses first time since 1932

Connecting over a love of horses and writing

What brands must do to weather troll-storm
Celebrity News

Got a new job? Check out these five money tips

Oscars: 6 Indian films that have so far been nominated at the Academy Awards | Bollywood Life
We and our partners use cookies on this site to improve our service, perform analytics, personalize advertising, measure advertising performance, and remember website preferences.Ok