Apart from the sector road that runs on two sides, the Badshahpur baoli is surrounded on the other two sides by boundary walls – one of a private resident, and the other of a government school. 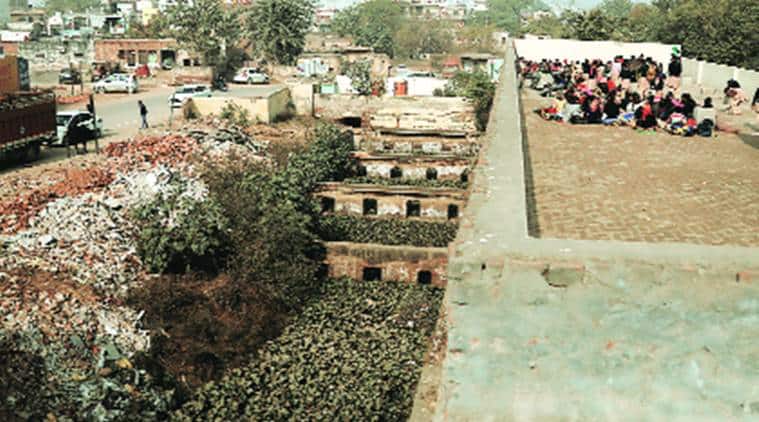 Adjoining Gurgaon’s Sohna road, beyond the main market of Badshahpur village, runs a sector road that was set to be the cause of certain death for a baoli (stepwell) in the area two years ago. After historians raised concerns regarding its endangerment, the structure was saved in January 2018, with officials choosing to realign the plan so that the road would run alongside the baoli.

Later on January 23, 2018, Haryana Department of Archaeology claimed it would take over the structure and “restore it to its original glory”. Two years later, however, while the area around the baoli has been transformed with heavy flow of vehicles through the day, the structure itself has remained the same – abandoned and neglected.

With construction and demolition waste as well as other garbage dumped all around its boundary, and vegetation that has grown through the stagnant water that lay at the base two years ago, covering two floors of the three storey structure, it is now virtually impossible to even spot the baoli as one passes through the area.

Apart from the sector road that runs on two sides, the Badshahpur baoli is surrounded on the other two sides by boundary walls – one of a private resident, and the other of a government school.

This was not always so, said Ved Prakash Mangla, a resident of Badshahpur, and the grandson of Mohanlal Mangla who constructed the baoli in 1905. At the time, Mangla said, it worked as a catchment area for water and was used for bathing, washing clothes, and as drinking water for animals.

“Around 25 years ago, however, the water dried out, because of which the baoli fell out of use.Even then though, it was well maintained. We had built a boundary wall around it, because of which trespassers could not enter and nobody could misuse it,” said Mangla.

In 2012, however, the structure was handed over to the Haryana Shahari Vikas Pradhikaran (HSVP) for construction of the sector road, in exchange for which Mangla received a compensation of around Rs 16 lakh.

“Sometime after that the boundary wall was broken down and the baoli started being used as a dumping ground. Although the construction of the road did not require its demolition or removal, it has not been looked after since then,” said Mangla.

“We would definitely like it to be restored and maintained. Maybe it could be turned into a picnic spot,” he said.

Atul Dev, the convener of the Gurgaon Chapter of the Indian National Trust for Art and Cultural Heritage (INTACH) also emphasised the need to restore the baoli as an architectural example of its time and to showcase “how people lived 100 years ago”.

“Ideally, if the baoli could be restored, there would be nothing like it. We may not be able to fill it up with water as we did before because the catchment area has been completely filled up, but if we restore it to some extent, it is a beautiful example of construction activity that was done 100 years ago. It is a chance for great learning and understanding how people lived in Badshahpur itself 100 years ago,” he said.

With different authorities passing the buck when it comes to restoration of the baoli, there is little hope for any change in its situation. While officials from the Department of Archaeology claimed the baoli was caught up in an ownership dispute, officials from the district administration said the structure was not directly under them, and those from Haryana Shahari Vikas Pradhikaran said maintenance was not their responsibility.

“The case is sub judice. There is some issue of ownership within the family, so we cannot take it over for restoration. We had visited the site last year to begin the work but could not undertake anything because we found there was an ownership dispute,” said Banani Bhattacharyya, Deputy Director of the Department of Archeology and Museums, Haryana.

Ved Prakash Mangla, when questioned about this, denied that there was any dispute in court over the baoli.

Officials from HSVP also confirmed the land was owned by them, with a senior official saying, “The baoli was under the names of a few individuals as per revenue records. The land has been acquired and they have been given compensation. The baoli is owned by HSVP but maintenance is not our responsibility since this is a private property that has been acquired.”

The Deputy Commissioner of Gurgaon, Amit Khatri, meanwhile, said, “There is no monument that comes as such under the district administration. It is either under Archaeological Survey of India (ASI) or state archaeology department. But that is not to say we do not have any stakes. We will certainly follow up and are very keen for it to be preserved and showcased for the people as a historical monument. We will try to take it up with the department concerned.”