In the absence of any standing crop, the desert locust is feeding on the green cover of the area. At threat are the orange orchards in the area, which have not faced such a crisis in a long time. 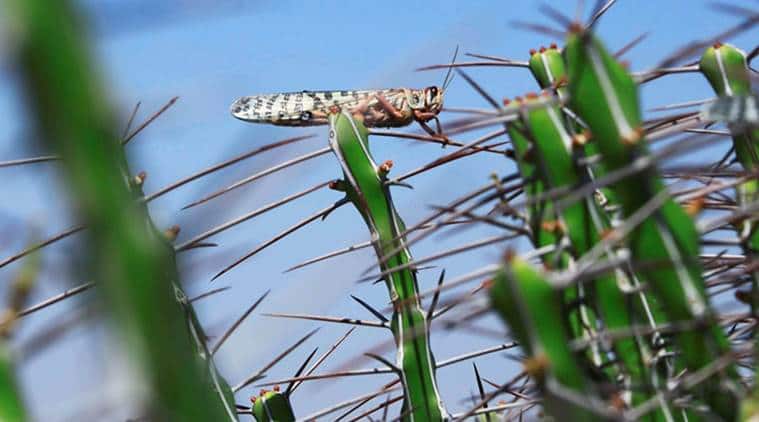 AN UNPRECEDENTED attack of desert locust is underway in parts of Vidarbha, which is a major threat to the orange orchards in the area. Officers of the agriculture department said this will be the first time since the 1990s that the state has reported such an attack.

Since early April, parts of Gujarat, Rajasthan and Punjab have reported sightings of the migratory and highly destructive desert locust, Schistocerca gregaria. This early sighting — the pest is normally sighted along the Indo-Pakistan border in July-October — has alerted the authorities of the dangers that lie ahead in this season. These short-horned grasshoppers are innocuous when solitary, but highly destructive when they in a swarm, and can migrate large distances in a short frame of time. Being polyphagous (able to feed on different kinds of food) in nature, the pests destroy every single bit of greenery on their way. A square kilometre of an area can accommodate 40 to 80 million of them.

In the absence of any standing crop, the desert locust is feeding on the green cover of the area. At threat are the orange orchards in the area, which have not faced such a crisis in a long time.

Sridhar Thakare, executive director of Mahaorange, which is the orange growers’ cooperative in the area, said it must be after 60 years such attack had been detected. “Control operations are on but if the swarm continues to grow, more than 1.51 lakh hectares of orange orchards could get destroyed,” he said.

Since its first sighting in April, the locust warning organisation (LWO) has treated over 21,675 hectares of affected area, mainly in Punjab, Gujarat and Rajasthan. However, swarms have been reported in the recent days from Madhya Pradesh and now, since last Sunday, Maharashtra has also reported the presence of the pest.

Subhash Nangre, Divisional Joint Director Agriculture, Amravati, said, at present, a single swarm was active in Varud and Morshi talukas of the district, as well as Ashit taluka of Wardha and Katol taluka of Nagpur district.

“It was back in the 1990s, when such a swarm was reported in Dhule district,” he said. Nangre claimed that the swarm had crossed over to the state from Betul district in neighbouring MP.

In India, they are generally sighted as singular hoppers with the country reporting its first sighting last year after a span of more than 20 years.

The early sighting is linked to unseasonal breeding of the insect in remote portions of the Arabian Peninsula in 2018 due to cyclonic storms, Mekunu and Luban, which had turned large tracts of the desert into lakes ideal for the breeding of the pest.

Multiple swarms are active in the Horn of Africa, laying waste to large tracts of crops like wheat, sorghum and maize in Ethiopia, Somalia and Kenya, among others. Multiple swarms are also active in Yemen, Oman, Saudi Arabia and Pakistan. Earlier this year, the government of Pakistan declared a state of emergency due to the attack and claimed that the pest had destroyed almost 30 per cent food crop.