Since early June, the number of tests conducted per day have been in the range of 100 to 200. 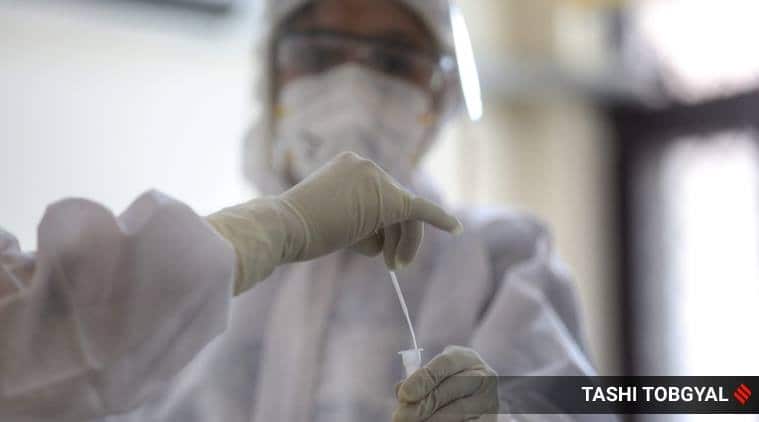 With 493 reported cases, 85 active cases and seven deaths, the pandemic continues to spread rapidly in the city while testing for the disease remains limited.

In the past one week, an average of 140 tests were conducted per day in the UT.

Since early June, the number of tests conducted per day have been in the range of 100 to 200. Despite the disease now spreading to at least 41 localities in the city, surveillance mechanisms such as rapid testing and random sampling of residents have not yet taken place.

The Indian Express takes a closer look at the status and mechanism for COVID testing in the city.

There are three government-facilitated testing centres in Chandigarh, including the PGIMER, GMCH-32 and the Institute of Microbial Technology (IMTECH).

PGIMER, which was the first institute to begin testing for COVID-19 in the city, has scaled up its testing from 70 to 700 tests a day.

Most of these tests are conducted with the RT-PCR machine, which is considered as the gold standard for testing, and is most widely used to diagnose patients with Covid-19.

PGIMER was also using GeneXpert for a while, a testing mechanism earlier used to detect Tuberculosis, which can now also be used to test for COVID.

The GeneXpert has a higher sensitivity than the RT PCR test and gives results within two hours, as compared to the RT PCR which takes six to eight hours to give results.

However, the hospital ceased using GeneXpert since the cartridges needed for using the machine are limited in supply.

In IMTECH and GMCH-32, testing is limited to using RT PCR. In GMCH 32, authorities are considering using a GeneExpert machine alongside the RT PCR for testing patients whose results are needed urgently.

“However, using this machine separately means we will need more manpower which we do not have. Furthermore, this could not be used for bulk testing, as only four can be tested in one round,” says a source from the hospital.

Though both the neighbouring cities of Mohali and Panchkula have conducted surveillance using antibody test kits, these kits have not been used in Chandigarh until now.

In Panchkula, another batch of antibody testing kits has been procured by the administration to conduct surveillance activities congested localities.

Though antibody testing kits have not been used in Chandigarh for surveillance, these kits have been acquired by PGIMER to test donated blood plasma for anti-bodies.

This will allow for doctors to know whether the plasma sample can be used for conducting convalescent plasma therapy on COVID-19 patients admitted to the hospital.


As for antigen testing, these are another form of rapid testing which give results within 30 minutes, but are considered to be more accurate and sensitive than the rapid antibody tests.

Seven medical institutes across India, including PGIMER, have been chosen to validate these kits. Cities like Delhi have already begun using these kits for surveillance activities to test high-risk asymptomatic populations.

However, the Chandigarh Administration has not yet revealed any such plan to survey the city’s high-risk population.

Only SRL lab in Sector 11 has been approved to test for Covid-19 in Chandigarh from the private sector. The laboratory solely uses RT PCR to conduct tests and charges Rs 2,000 per test.