Yadav also underlined that no one will be removed from any welfare schemes of government for opposing NPR, though there is a provision to impose a fine. 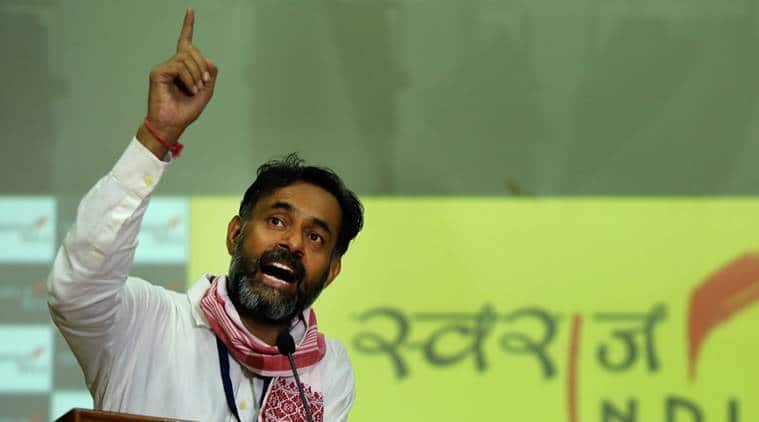 Claiming NRC and NPR are same, Yadav pointed out that no one will ever be asked to show documents but that all details will be entered by a surveyor and only upon when doubts will be raised on anyone, documents will be asked. “Kaagaz main kuch bhi nahi likhvayenge… that should be the way to oppose NPR,” he said.

Yadav also underlined that no one will be removed from any welfare schemes of government for opposing NPR, though there is a provision to impose a fine.

The Swaraj India president was speaking at an organised under the banner–”We The People of India’–to remember Rohit Vemula, a Dalit research scholar who committed suicide on January 17, 2016, owing to the alleged institutionalized caste discrimination on the campus, leading to nation-wide protest.

Yadav said that even if CAA does not take away anyone’s citizenship, it is still dangerous, adding that it was the first time citizenship was being linked to religion and that it was what the founding fathers of the nation fought against. “We are trying to make a Hindu Israel or Hindu Pakistan. That is a model which was discredited in Europe and we want to adopt it,” he said.

“I am proud of being an Indian because it has offered shelter to anyone who sought refuge, from any nationality, from any religion,” Yadav said recalling Swami Vivekananda’s speech in Chicago, adding “these are his exact words and it is what CAA violates”.

According to him, the BJP is desperate to win in West Bengal and that “they know the only way they can win is by making it nakedly communal.” The attempt is to make categories of Citizenship- those who can claim India their natural home and can claim it anytime and those who do not have a natural claim and are allowed to live but not at the same level, he added.

Yadav said that the central government will not step back as the CAA has already been notified on January 10, 2020, and the process of NPR has been initiated.

“We too cannot go back. It is about a struggle to save the very soul and idea of India… We have to recreate the idea of India and we will win. The only question is ‘when’… and we are ready for a long battle… it is not a protest against CAA or NRC. It is a movement now, for defending the idea of India. We call it ‘Bharat Jodo Andolan’, like ‘Bharat Chodo Andolan’ or Quit India Movement. They will continue to break and divide, and we will continue to fight and unite,” he stated.

Radhika Vemula, the mother of Rohith Vemula, was also present at the event. “The value of a man was reduced to his immediate identity and the nearest possibility. To a vote. To a number. To a thing. Never was a man treated as a mind,” she recalled from her son’s suicide note, alleging that the current government is doing the same.

“We should all unite and protest now. I could not save my son. Now is the time to fight and save our country,” she said.

For all the latest Hyderabad News, download Indian Express App