While the fatality rate in Karnataka was 1.62 per cent, it was 2.11 per cent in Bengaluru, which indicates at least two people in every 100 positive cases of Covid-19 succumb to the infection in Bengaluru and surroundings. Medical experts in Karnataka on Wednesday suggested the government to give priority to patients with comorbidity and those in serious conditions to bring down the fatality rate linked to the Covid-19 pandemic.

In a meeting convened by Chief Minister B S Yediyurappa in Bengaluru to strategise Covid-19 containment plans, medical experts also suggested that treating asymptomatic and mildly symptomatic patients in home isolation will be appropriate as it would lessen the burden on hospitals.

Karnataka reported its first Covid-19 death on March 10 when a 76-year-old man with a travel history to Saudi Arabia succumbed to comorbidities in Kalaburagi. Since then, the state has cumulatively recorded 245 deaths — as on June 30 — with 99 of them confirmed in capital city Bengaluru alone (both urban and rural areas).

While the fatality rate in Karnataka was 1.62 per cent, it was 2.11 per cent in Bengaluru, which indicates at least two people in every 100 positive cases of Covid-19 succumb to the infection in Bengaluru and surroundings.

Further, an analysis of the death toll in the state indicates that the fatality rate has seen a hike since the beginning of June. According to statistics issued by the Department of Health and Family Welfare Services, 52 deaths were reported in Karnataka till June 1 (12 in Bengaluru) since the first fatality on March 10.

However, 194 more people in the state (87 more in Bengaluru) succumbed to the infection in the last 30 days. The Karnataka War Room (as per the report on June 25) indicated that 54.39 per cent of these deaths were among people aged 60 or above, with most of them possessing comorbidity or other chronic illness.

This is believed to have spurred medical experts in the state to recommend priority treatment to those with comorbidity.

Medical experts, who met the CM, comprised Dr Sudarshan Ballal (Manipal Hospitals), Dr Sharan Patil (Sparsh Hospitals), Dr Vivek Jawali (Fortis Hospital), and Dr Giridhar Babu (Public Health Foundation of India) among others. They stressed on the need for enhancing the process of contact tracing to avoid people, identifed as primary or secondary contacts, going unnoticed. “The staff strength at the field level must be enhanced for contact tracing. Services of other departments may also be used,” they suggested. 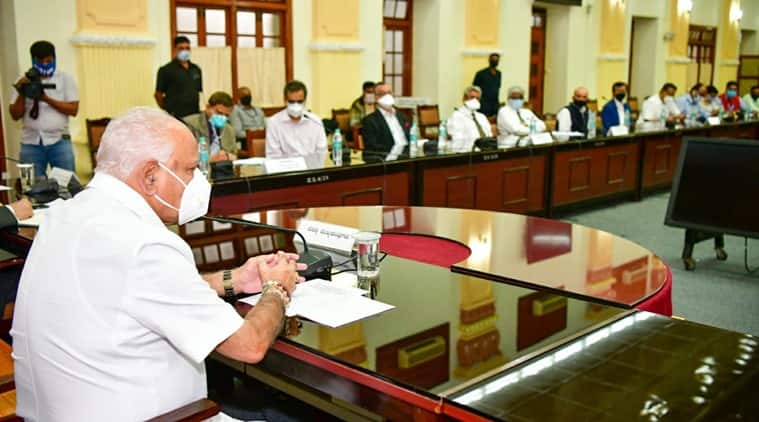 The experts added, “There is a fearful atmosphere and social stigma attached to this pandemic and people must be taken into confidence,” pointing out the rise in the number of suicides of people testing positive for the virus.

The need for an uninterrupted oxygen supply chain and a revised supply chain of drugs for effective treatment of Covid-19 patients were also discussed in the meeting.

“The opinions and recommendations put forth by the doctors will be discussed in detail and will be considered by the government to take necessary steps,” Medical Education Minister K Sudhakar said.

Health Minister B Sriramulu, Home Minister Basavaraj Bommai, and Chief Secretary T M Vijay Bhaskar were among the government representatives who took part in the discussion held in Vidhana Soudha.