As part of the programme, all students who go forward with their ideas will receive Rs 2,000 as seed money to set it up. The seed money for the final projects will be released on October 15 and students can work on their projects till November 15. Class XII student Tulika Gupta wants to start an enterprise selling low-cost sanitary napkins to women from marginalised communities and creating awareness on menstrual hygiene, use of sanitary napkins, and their disposal. She wants to set it up using seed money that she and her classmates will receive from the Delhi government in the coming week.

Across Delhi government schools, class XI and XII students are currently in the process of drawing up and presenting their ‘business ideas’ as part of the ‘Business Blasters’ programme, in which all students who go forward with their ideas will receive Rs 2,000 as seed money to set it up.

Tulika and her group of seven classmates have named their project ‘Silence Breakers’. “Our motive is to make these sanitary napkins available at a cheap rate and to create awareness about their usage. I know so many people who still use cloth or material lying around the house, including people in my family. We have identified a village by the Yamuna as our target area for now where we’ve found very little awareness on this. We’ve also identified an NGO from which we can procure low-cost napkins at around Rs 17-18 for a pack of 7, which we aim to sell for Rs 20, and we are thinking of holding nukkad nataks, rallies and making posters for awareness building,” she said. 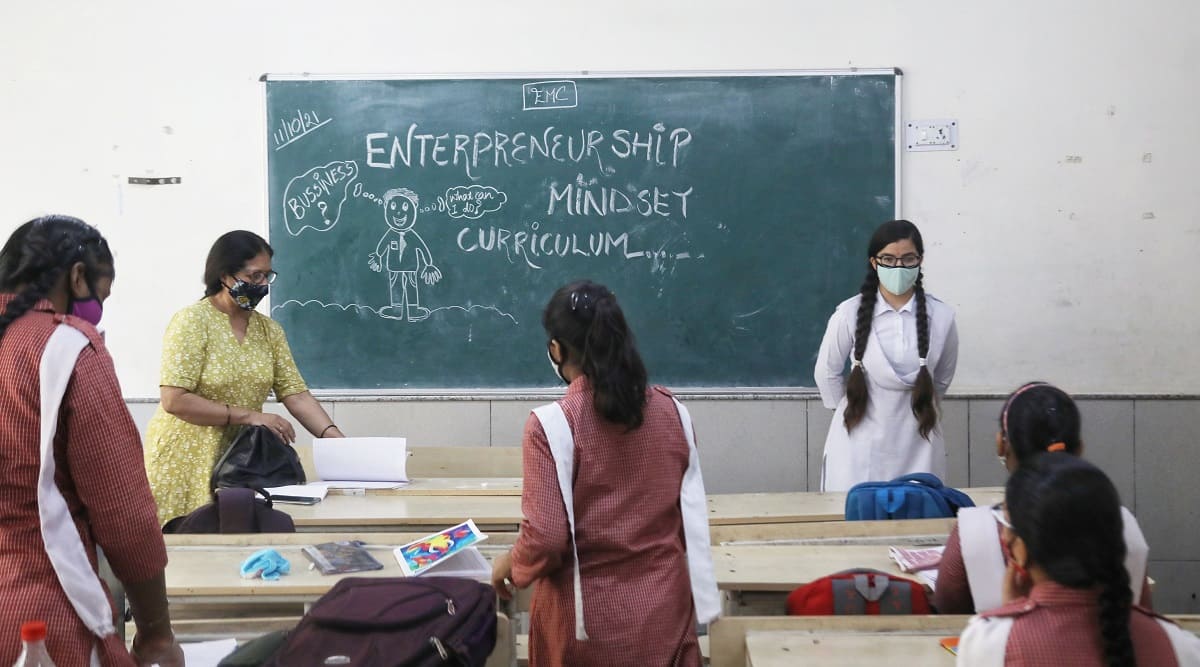 In another classroom, a group of five girls want to set up a business selling ornamental pieces with ‘air-purifying’ plants. “Air-purifying plants are popular nowadays because of pollution concerns… We will work on stem propagation of plants like money plants, jade plants and aloe vera. For the planters, we won’t buy any waste material. Instead, we will make them using waste material from our house… We will arrange the plants on a circular plate and they will be watered using a drip system technology, making them self-reliant. We will decorate these with LED lights and attach a rotating motor so the plate will rotate,” said Shivya, on their ambitious plan. Her teammate Kritika said they have not decided the rate at which they would sell their product and would gauge their customers’ response first.

The projects will be approved through “peer review” and need to fulfil conditions such as “are they presentable” and “is there scope for growth”. The seed money for the final projects will be released on October 15 and students can work on their projects till November 15.

For class XII students, the project also overlaps with their pre-board examinations and is just before their first-term board examinations scheduled to start mid-November. As a result, participation is voluntary and parents need to give written consent for their children to participate.

Several students said their parents had reservations about them spending this academically crucial period on these projects.

“My father was not interested in this and told me to focus on NEET. I spoke to him and said that if NEET doesn’t work out, the skills I learn here will help me if I decide to set up a business. He eventually came around and even helped by telling me about a cousin in event management who I can speak to about wholesale prices,” said Vishakha Gupta from the tie-and-dye project.

Alok Tiwari, a teacher in the Entrepreneurship Mindset Curriculum core team, said around 700 ‘business coaches’ have been brought on board on a voluntary basis to mentor the projects across schools and help students actualise them.