As the state government enforced the nation-wide lockdown, labourers working in factories, construction sites, agricultural fields started leaving their settlements from Rajkot city and rural parts of the district as well as neighbouring Morbi district on Wednesday. The exodus of migrant labourers from Rajkot district continued for the third straight day on Saturday as they travelled on foot on the National Highway 27 to reach their homes in central Gujarat and the neighbouring state of Madhy Pradesh. However, the number of migrants taking the journey were comparivetly less than the previous two days.

As the state government enforced the nation-wide lockdown in an effort to contain spread of novel coronavirus infection, labourers working in factories, construction sites, agricultural fields started leaving their settlements from Rajkot city and rural parts of the district as well as neighbouring Morbi district on Wednesday. By evening, more than 2,000 labourers assembled at Maliyasan village on the outskirts of the city. Police tried to persuade them to return to their places of work and assured that their basic necessities would be taken care of. However, the labourers reportedly told officers that they would travel to their native places at any cost, even by defying law. Eventually, the Rajkot district administration had deployed 50 buses of Gujarat State Transport Corporation (GSRTC) to ferry them to Dahod and up to Gujarat-Madhya Pradesh state boarder on Wednesday night. While Rajkot district collector Remya Mohan had emphatically said that the deployment of buses was a one-off event to ‘avoid a law and order situation,” a steady stream of labourers continued to walk on the NH27 and NH8 on Friday as well.

“By late evening, a few thousand labourers gathered at Chotila and their numbers kept on swelling. NGOs, with the help of the district administration provided them food and water. But by the sheer number of them, it was not possible to send them back to their places of work. Eventually, the government pressed around 20 GSRTC buses and private vehicles to drop the labourers to their native places in central Gujarat and on the Gujarat-Madhya Pradesh state border,” sources in Chotial town said on Saturday.

Incidentally, Prime Minister Narendra Modi had addressed the nation on Tuesday, announcing a country-wide lockdown for three weeks to contain the spread of the infectious COVID-19. Modi said the lockdown was a sort of curfew, heavily restricting movement of people and requiring them to stay indoors. However, labourers defied the restrictions and took the highway on Wednesday. “Some said they would keep walking towards their native places even if they are shot. The situation was getting out of control as there were children with them. Therefore, we had to request to district collector do something for their evacuation,” MC Vala, police inspector of Kuvadva Police station on NH27 told The Indian Express. 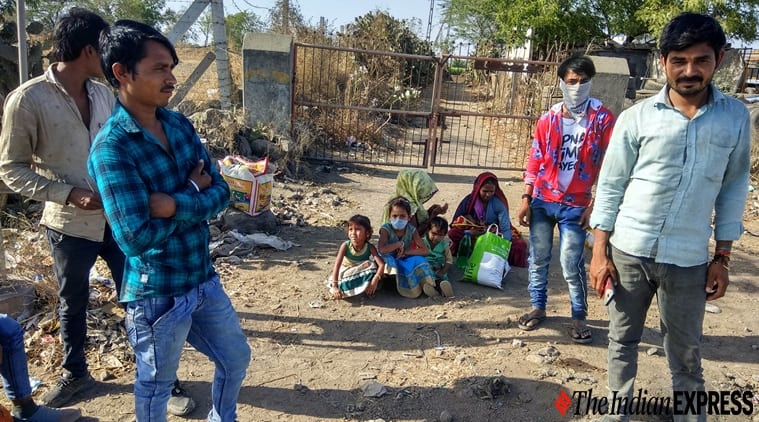 The exodus continued on Friday and the assembly point shifted from Maliyasan village near the city to Chotial in Surendranagar district. “We got to board a bus from Chotila at around 11:30 pm and reached out home in Kheda district at 5 o’clock this morning (Saturday). We are so much better at our home then our place of work. We were running out of money and ration and other items of daily use were getting costly,” a woman, who was part of a group which had been camping near Kuvadva on Friday noon told The Indian Express over phone.

Officers of Surendranagar district and GSRTC of Rajkot division could not be reached for a comment.

The flow of out-bound labourers decreased on Saturday but continued nonetheless. “We have not got any work for the past one week and I am afraid the situation may remain the same for the next two-three months. My parents at our home back in Jabua in Madhya Pradesh are worried. They are asking us to return. So, we want to return. If no transport is available, we shall walk our way,” Akash Dindor (18) said after he and seven other members of his family got out of an auto-rickshaw at Greenland Chowkadi in the city on Saturday afternoon.

Dindor said that he and his family members were camping in Bhayavadar town in Upleta taluka of Rajkot district and used to work as agricultural labourers. “But people gave us lift for short distances. The auto-driver was one them,” Dindor further said.

“We are afraid if we remain here, we can contract the viral infection. We want to be at our home,” said Rama Dindor, one of the woman in the group.

Almu Bhabhar, a native of Dhar district in MP, was leading another group of around 10 people who otherwise were camping near Kankot Patiya on Kalavad Road. He said that he has been coming to Rajkot for the last five years and earns Rs 600 per day by working as a mason. He goes to labour market near Jaddu’s Food Field on Kalavad Road of the city every day. “But since March 22, no one is calling us for work. Ration is hard to find. At whose mercy shall we be if we stay back? Some 35 people we know left yesterday and they have managed to reach there home. Police arranged lift for them in rickshaws. Therefore, we also started walking this morning,” said 30-year-old Bhabhar.

They had walked more than 20 km by around 4 pm on Saturday. “Almost everyone is leaving for their homes. We started feeling lonely without people from our state. So, we also started walking this morning,” said Ramila Ninama while breastfeeding her four-month-old daughter as the group halted briefly near Maliyasan village to rest.

Devsang Damor (40), a native of Sejwanichhoti village in Jabua of MP, carried his 4-year-old granddaughter Shushila while his wife Roja had their four-month-old grandson tucked in a piece of dupatta. “We did not get any work over the past 10 days. I heard that buses are available till today. So, we left our hut near Khokhadadad river bridge in the city at around 11 am,” said Damor as his eight-member family approached Kuvadva. Meanwhile, a group of eight young men were intercepted by police near Aji dam Chowkadi while they were walking towards Greeland Chowkadi. Police constable Krunalsinh Jadeja persuaded the group to return to their place of work in Jetpur town of Rajkot district. He even dialed the man who had hired them to work with a drilling rig. “I assure you, this is now for 17 days only. We can facilitate your return to the place where you’ve come from today and can help arrange for your lodging and boarding during this period. You see, neither buses nor any other vehicles are plying. Even if we allow you to continue to walk, you would not get any vehicle to travel,” the constable said in a rather caring tone.

“But sir, my friend has already left with his oil tanker from a refinery in Jamnagar and has told us that he would reach Maliyasan by evening. He has assured us of a lift. Please let us go. There is no work back in Jetpur and we shall go hungry,” said Veerpal Gurjar (25), a native of Dausa district in Rajasthan and who used to earn Rs 500 by working as labourer.

Eventually, the police team allowed Veerpal and his friend Lala Gurjar to continue walking but continued to persuade the remaining six, who were from Shamlaji in north Gujarat.