Paying his last respects to poet Dev Sen, Governor Jagdeep Dhankhar on Friday said her death was a huge loss to the world of literature as well as the state. 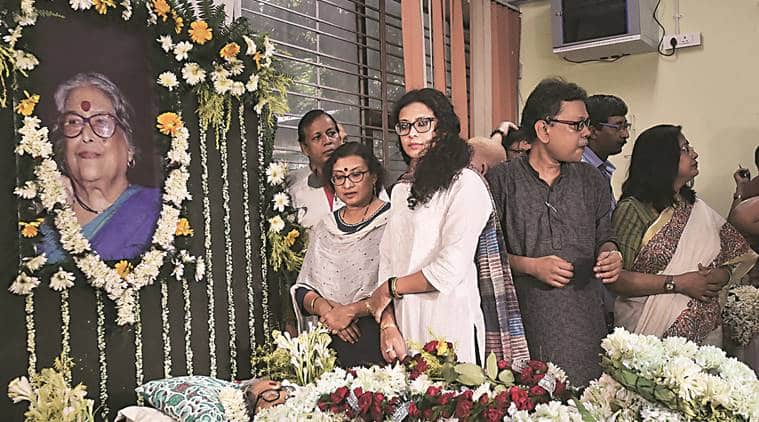 The last journey of Padma Shri Nabaneeta Dev Sen, who passed away at her residence on Thursday evening after prolonged illness, started around 11 am Friday. Her mortal remains were first taken to Jadavpur University where she had studied and taught.

Professors, Vice-Chancellor Suranjan Das and students paid their last repsects to her. Later, her body was taken to Bangla Academi where her admirers paid their tributes before she was cremated.

The Sahitya Akademi awardee was 81 and is survived by two daughters.

Paying his last respects to poet Dev Sen, Governor Jagdeep Dhankhar on Friday said her death was a huge loss to the world of literature as well as the state.

The Governor went to Dev Sen’s residence in Hindustan Park along with wife Sudesh Dhankhar. “Her death is a huge loss to the world of literature and culture and city of joy and West Bengal. I have come here to pay my heart-felt condolences to one of the greatest writers. ‘Bhalobasha’ (Dev Sen’s house) has her lively presence all through. I have had the occasion to speak to both of her daughters. They are brilliant. I have conveyed to them that their elder brother (himself) is in the Raj Bhawan. If they wish to convey anything, I will be only a message away,” Dhankhar told reporters outside Dev Sen’s house.

Poet Shankha Ghosh and others too visited her house.

Dev Sen was born to poet-couple Narendra Dev and Radharani Devi in Kolkata. She gratuated from from Presidency College and received her master’s degree from Jadavpur University in 1958. In 1959, she married Amartya Sen, an economist and academican, who would later went on win the Nobel Prize in Economic Sciences in 1998. The couple separated in 1976. Later, Dev Sen went abroad for higher studies and built a career as a writer thereafter.

She earned a master’s degress with distinction from Harvard University and PhD from Indiana University. She completed her post-doctoral research at the University of California at Berkeley and Newnham College, Cambridge University. She was a University Grants Commission Senior Fellow at the University of Delhi. In addition to Bengali and English, she could read Hindi, Oriya, Assamese, French, German, Sanskrit and Hebrew. Dev Sen has published more than 80 books in Bengali, including poetry, novels, short stories, plays, literary criticism, essays, travelogues, translations and children’s literature. Her first collection of poems, ‘Pratham Pratyay’, was published in 1959. In 2002, Dev Sen retired as Professor of Comparative Literature at Jadavpur University.