What remains in the ruins are deep faultlines threatening what was once a syncretic existence, forged out of lives lived together, eked out jointly on the fringes of the national capital, sustained on its promises, and secured tight by combined struggles. The colonies are indistinguishable from each other, Chajjupur blending into Maujpur, Maujpur into Ghonda, Ghonda into Jafrabad, Jafrabad into Chand Bagh. Each have rows and rows of small shops, and homes in small bylanes standing cheek by jowl. It is now also the address of one of Delhi’s worst riots.

What remains in the ruins are deep faultlines threatening what was once a syncretic existence, forged out of lives lived together, eked out jointly on the fringes of the national capital, sustained on its promises, and secured tight by combined struggles.

In Bhajanpura, Ali Motor Repair store stands next to Raju Band Baraat; while Chajjupur has a cart serving ‘Muslim biryani’ parked near Delhi’s ubiquitous Agarwal Sweets shop. Many shops have Hindu owners and Muslim workers, as well as the other way around. Most find employment locally, in the dozens of small paint shops, mobile repair shops, local chemists, kirana stores, and autorickshaw and e-auto repair shops. Many of the colonies, including in Bhajanpura, North Ghonda and Karawal Nagar, figure in DDA’s list of 1,731 unauthorised colonies. They grew haphazardly and unplanned, one sudden spurt happening during the Emergency when those forcibly evicted from Turkman Gate in Old Delhi were settled here.

Underlining the new geography, a youth at Maujpur Chowk laughs that he is now “a guide for riot tourism”. “On your right is a Hindu mohalla, and 200 metres ahead, Mohammedan… We never looked at our neighbourhood earlier through the lens of religion… which pocket is Hindu and which pocket Muslim hardly mattered,” he says. “Now it does.” In the violence that began on February 23, soon after BJP leader Kapil Mishra’s speech against Citizenship (Amendment) Act protests, in Northeast Delhi, the toll stood at 42 on Saturday. More than 300 people are among the injured. 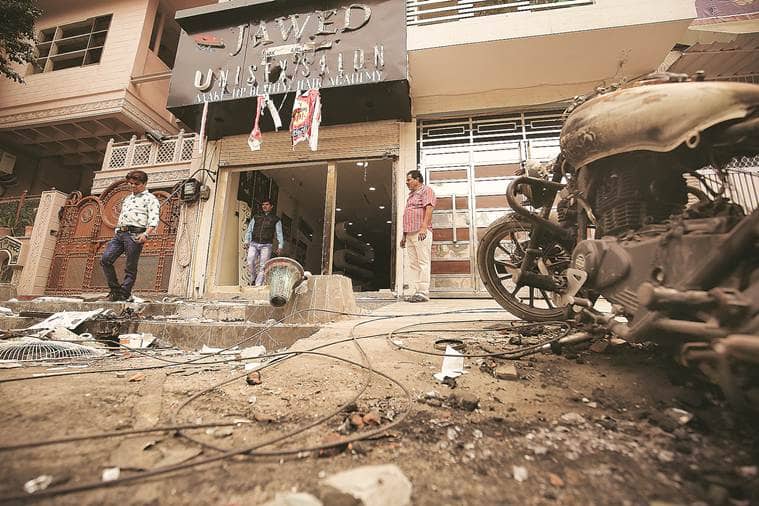 On the kilometre-long stretch between Durgapuri Chowk and Maujpur Chowk, the distinctions are clear, often marked by roads, sometimes by lanes — between the Hindu-dominated Jyoti Colony and the Muslim-majority Kabir Nagar; between the middle-class Hindu neighbourhood of Yamuna Vihar and the working-class Muslim settlement of Munge Nagar.

“You know what pains me the most?” says Asif, 35, of Kabir Nagar, talking about a life-long dost Siddharth. “I have lost friends. Someone told me Siddharth shared my address with the thugs who went on a rampage on Tuesday. Maine kya bigada tha uska (What harm had I caused him)?”

A little over a year ago, the inauguration of Delhi Metro’s Pink Line had brought a new shine to the area, putting Jafrabad, Maujpur, Gokulpuri, Johri Nagar and Shiv Vihar on the map. In the wake of the violence has come the realisation that at the other end of this 18-km, elevated Metro line is Trilokpuri, which ironically saw the last communal conflagration to have happened in Delhi, in 2014, leaving at least 35 injured.

The Metro stations, usually bustling with people and with autorickshaws calling out for customers, are now deserted. The violence was preceded by a sit-in at Jafrabad Metro Station beginning February 22 night, followed by the controversial speech made by BJP leader Mishra near Maujpur Metro Station the next day. Signs remain of that violence still, in the anti-Citizenship (Amendment) Act (CAA) and anti-National Register of Citizens (NRC) slogans scribbled on the walls at Jafrabad, and calls backing the two government moves at Maujpur. The outside wall of the Maujpur station holds another scribble: ‘Nathuram Godse’.

On Thursday, the only people hanging around at Jafrabad Metro Station are paramilitary personnel. At a ticket counter on the first floor, an official, staring blankly at his phone and refusing to be identified, says, “Nobody is coming. Not one person has come in the last one hour.”

On most days, the Metro riders here are people headed out to factories in Shahdara or Loni, or offices in Delhi. “The people who live in this area are not rich. Either they work locally, at tailor or mechanic shops or other small businesses,” the official says.

There is another link that snakes through this area: a 15-feet wide and as deep a drain into which flows sewage of the area (excepting the garbage that ends up on the road). Small bridges dot it, used by people to go from one side to the other. The drain is now inseparable from the riots. Bodies of at least four victims of the violence were fished out from it, while local divers have been employed to look for more. The death of one, Intelligence Bureau officer Ankit Sharma, has been linked to AAP councillor Tahir Hussain, since suspended from the party.

It was such administrative neglect, as reflected by this drain, that made many here turn to the Aam Aadmi Party over the past few years. The party centred its election campaign in Northeast Delhi this time around civic improvements, winning four of the five Assembly seats — part of its stunning sweep of the Capital.

However, it was also here that the BJP’s campaign against the anti-CAA protests was seen to have worked, with Northeast seeing several small sit-ins against the law. This is seen to have been the main reason for the BJP’s win against well-liked AAP candidate and senior leader Durgesh Pathak. Says a source close to him, “The BJP and RSS worked overtime to polarise the electorate. That was the headwind we had to fight in the polls. And that is what has contributed to this atmosphere.”

The resentment shows in the anger of Amit Mishra of Babarpur, 26. “The road outside our home is unpaved and the naala always smells,” he says. “We thought if we vote for the AAP, this would get better. The BJP told us the AAP would allow more Shaheen Baghs, embolden Muslims.” With five of his friends hospitalised in an attack by an alleged Muslim mob, Mishra says, “That is what has happened. I wish I had listened to the BJP.”

The violence also touched Yamuna Vihar, with its wider streets and relatively more well-kept homes. A Javed Unisex Salon, next to the ‘sampark karyalaya’ of BJP councillor Pramod Gupta, was attacked, with its glass door shattered. The councillor’s office is now empty, and a guard says he hasn’t been in for a week.

An AAP government also held out promise of healthcare and education. Most children here go to small private schools located in narrow lanes, or some to madrasas. Among the handful of government schools is Zeenat Mahal Governement Senior Secondary School in Jafrabad. It is among the 20 Urdu-Medium schools run by the Delhi government.

Among those targeted by rioters was Arun Modern Public Senior Secondary School at Brijipuri, owned by Bhisham Sharma, a former Congress MLA who joined the BJP in April 2019. It stands next to Farooqia mosque,which was also damaged. Says Principal Jyoti Rani, “Both Hindus and Muslims study at the school. I have been teaching here for more than 30 years. Nothing is left. The challenge is how to begin to rebuild.”

The many coaching centres in Yamuna Vihar, for everything from UPSC to medical entrance, also fear the same. Navneet Gupta, the owner and manager of one, says, “When the rioters came, students were inside. We were plain lucky that police arrived on time. Pura season barbad ho gaya. Log aane main darenge (A whole season is lost. People will be scared to come).”

A 22-year-old Muslim youth, refusing to be identified, says he had done a course locally hoping to become an apprentice at a tailor shop, graduating “up” from what his father did. “We have gone back 10 years now. I will also cut clothes like my father. There is nothing else in sight for me.”

Under the AAP government, Northeast Delhi got 34 mohalla clinics, though residents of Chand Bagh say they still have to cross over to Bhajanpura for basic facilities.

Al Hind Hospital, operating out of a narrow building in Mustafabad, is a recent development. It was overwhelmed quickly when the dead and injured arrived after the riots, especially those who couldn’t make it to the only big government hospital nearby, GTB Hospital.

Less than 3 km away is Old Mustafabad, where a large slum cluster was set ablaze Wednesday night. Most of its residents, Muslim as well as Dalit, are daily wagers who collect garbage or queue up for labour every day, and say they ran away to save their lives. “Violence like this always affects the poor,” says one. Many have decided to leave the city.

Around 12:30 pm, nearly 24 hours after the violence has simmered down, a fire engine goes screaming down the bylanes of Maujpur. Local traders, sitting outside their shut establishments and discussing their losses, stand up uncertainly. As the fire engine halts next to a small shop, situated behind a Reliance Fresh department store, with smoke visible, they gather around.

“Has it started again?” one of them asks. After a while, another shouts out to the assembled group, “It’s a short-circuit. Kuchch nahin hua hai (It’s nothing).”

The people though refuse to move.

One voice rings out, “Ab kya bharosa (Who knows)?”