Several opposition leaders said unruly elements could have infiltrated the movement and it was a matter of concern but would not say it publicly as it would end up tarnishing the agitation and echo remarks made by senior government functionaries. 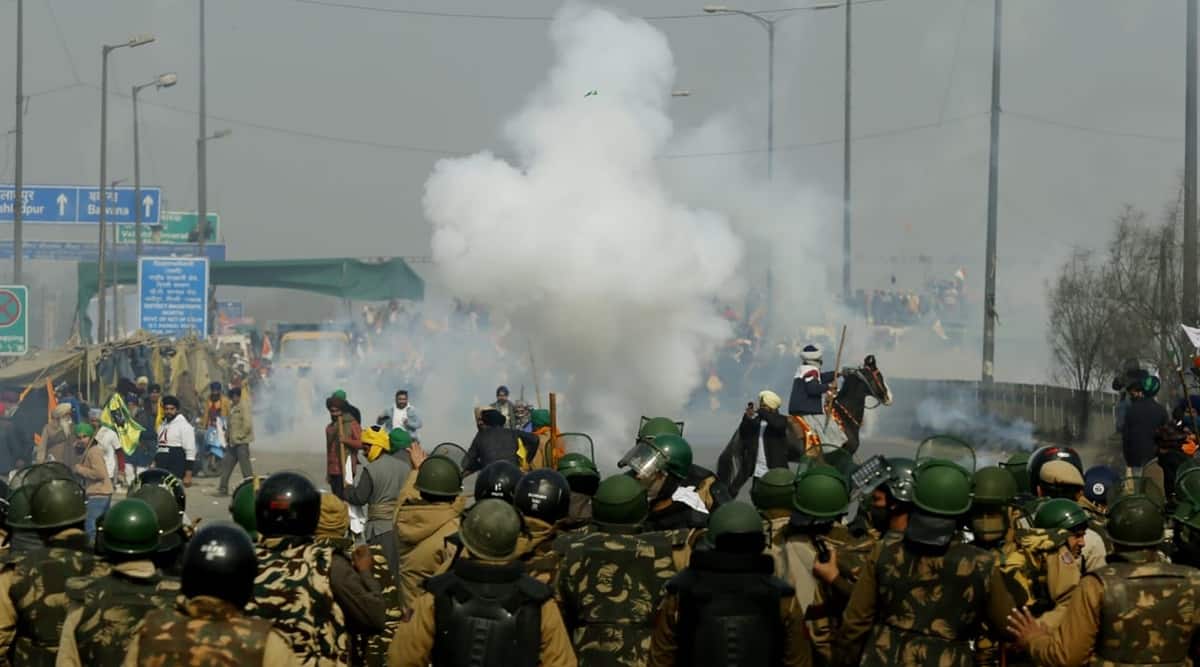 Following incidents of violence in the national capital on Tuesday, many in the Opposition admitted it can impact the discourse over the farmers’ protests but argued that while unruly scenes must be condemned, the focus should not be allowed to move away from the demand for repeal of the three farm laws. The Opposition leaders indicated the forthcoming session of Parliament would be stormy.

“Violence destroys perception….however temporary it may be,” a senior Congress leader said, arguing that the farmer unions, knowing well that the agitation is largely leaderless, perhaps should not have taken out the tractor parade and instead focused on smaller rallies in district headquarters.

Several opposition leaders said unruly elements could have infiltrated the movement and it was a matter of concern but would not say it publicly as it would end up tarnishing the agitation and echo remarks made by senior government functionaries.

Congress leader Rahul Gandhi said violence is not the solution to any problem. “If anyone gets hurt, the damage will be done to our country. Take back the anti-agricultural laws in national interest,” he said in a tweet in Hindi.

“Whatever and whosoever is responsible for the vandalism on Republic Day at Red Fort is highly condemnable and deplorable,” Leader of the Opposition in Rajya Sabha Ghulam Nabi Azad said. Congress deputy leader in Rajya Sabha Anand Sharma said it is a situation entirely created by the government. 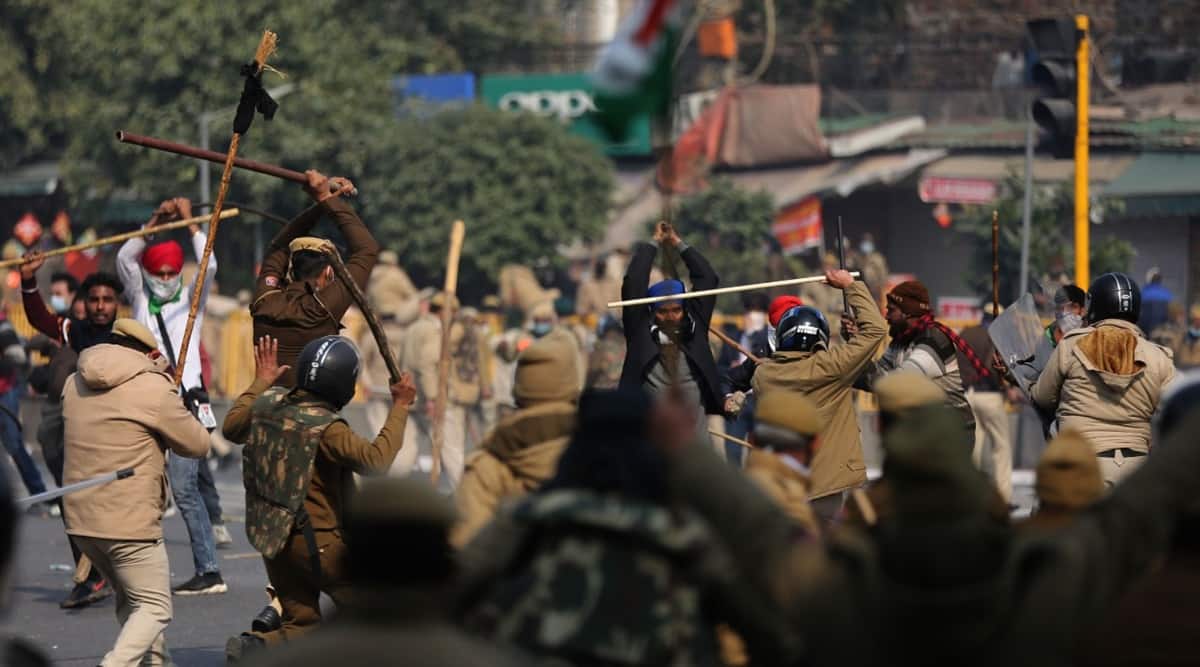 Congress communication department head Randeep Surjewala said “violence of all shapes and forms is reprehensible and gives the opportunity to elements within and outside the government to divert the core and fundamental issues of the struggle of the farmers”.

NCP chief Sharad Pawar said a way out should have been found over the farmers demands without hurting the protesters who have been agitating for two months. The NCP leader said from the information he has received, strict conditions were imposed on the protesters before they took out the tractor rally. “It is my expectation that the Centre shows prudence and gives up its extreme position on the issue while holding dialogue with these (farmers) bodies,” the former Union minister told the media in Mumbai.

Trinamool Congress chief and West Bengal CM Mamata Banerjee said she was deeply disturbed by the worrying and painful developments that have unfolded on the streets of Delhi but argued the Centre’s “insensitive attitude and indifference” towards farmers has to be blamed for “this situation”.

“First, these laws were passed without taking farmers in confidence. And then despite protests across India and farmers camping near Delhi for the last 2 months, they’ve been extremely casual in dealing with them. The Centre should engage with the farmers and repeal the draconian laws,” she said.

“Shocking scenes in Delhi. The violence by some elements is unacceptable. It’ll negate goodwill generated by peacefully protesting farmers. Kisan leaders have disassociated themselves and suspended the tractor rally. I urge all genuine farmers to vacate Delhi and return to borders,” Punjab Chief Minister Amarinder Singh said.

Sharma said the incidents of Delhi were a “self-inflicted wound on the Republic of India”. “The government had no business to violate the federal spirit of the Indian Constitution. Agriculture is with the states…India cannot be one market…It is a continental size country with fragmented markets and subsistence farmers. You have threatened their very livelihood and created apprehensions in their mind. The government has been arrogant and obdurate. They should have instead of putting on hold the laws should have repealed those,” Sharma said.

Sharma said the Supreme Court instead of forming the panel should have formed a Constitution Bench to go into the issue of constitutionality of these laws. He said the government must “wake up” and instead of persisting with the wrong that they have done, accept the mistake and bring a Bill to repeal the laws.

Senior Congress leader Manish Tewari said the NDA-BJP government has failed both to resolve the issues that the farmers have been raising for more than four months as well as maintain law and order on Republic Day. “Strict action should be taken against those who chose to take law into their own hands. Simultaneously the Central government should realise the gravity of the situation and even now preempt this spark from turning into full-fledged agitation that would consume the entire country. It has already become a people’s movement,” he told The Indian Express.

Surjewala said “violence is an anathema to our democratic set up and any kind of violence is neither appropriate nor in tune with the struggle of the farmers…the joint morcha of farmers have already issued a statement disassociating themselves from the people who violated the route or committed any kind of violence…the police and administration too should have been sensitive as one farmer has died and there are videos that showed farmers were beaten up like animals on the borders.”

In an official statement, the Congress said, “The agitators must keep their goal in mind. Non-violence and peace have been the biggest strength of this farmer agitation. We sincerely hope that this alliance of the farmers, labourers & the poor will continue to be committed to a peaceful and non-violent struggle for the repeal of the three three anti-agriculture black laws.”.

CPM general secretary Sitaram Yechury said “violence in no form is an answer and is unacceptable” but argued “the situation has been brought to this pass by the Modi government” as the protests are for a legitimate demand of millions of farmers from various states across the country. “That remains the issue at hand, and must be resolved. The solution is clear – repeal these farm laws….the PM must make the announcement.”

He said while the government “smears dissent”, BJP’s troll army vilifies those who ask for their rights. Ministers make wild allegations and law officers make claims without basis in court. “This is no way to deal with legitimate demands of our farmers,” he added. His CPI counterpart D Raja said “government should be held answerable for what has happened today…Government should have told the farmers that we will bring a bill to withdraw all the bills in the Budget session itself. They should have promised.. things would have been settled.” On the violent incidents, he said, “Nobody is justifying…these incidents should not have happened…that is not the primary issue. Focus should not be deflected. What is the solution…Government should accept the demands of the farmers.”