In June, the Pune City Police Crime Branch had arrested two men — one from Kolhapur and another from Satara — and had seized from them one live pangolin. 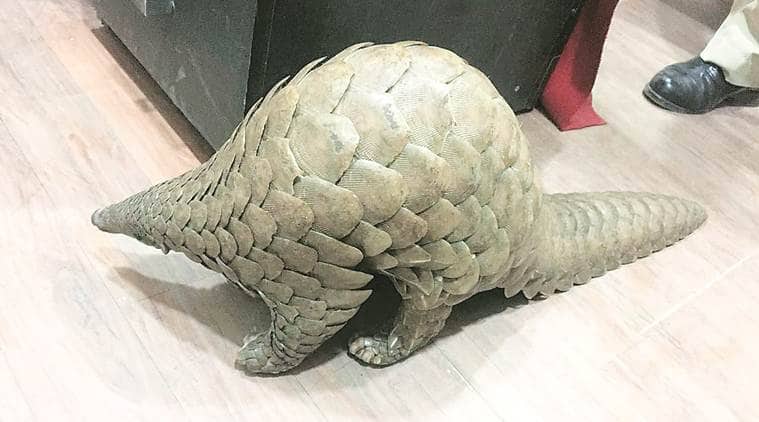 AFTER the revelation that the double murder in July in Tamhini Ghat was linked to a suspected pangolin smuggling racket, police have launched a coordinated probe into multiple cases of trafficking of the live pangolin and its scales.

The bodies of the two deceased, identified as Vijay Salunkhe (32) and Vikas Gosavi (28), were found charred in a burnt car on July 7. An offence of murder was lodged at the Paud police station. The Pune Rural Police on Friday arrested two men, identified as Ashok Hilam (31) and Ganesh Waghmare (27), who suspected that the two deceased had tipped-off the police about them. The police have now revealed that the duo have two offences of pangolin smuggling registered against them in the past in Raigad and Thane.

In June, the Pune City Police Crime Branch had arrested two men — one from Kolhapur and another from Satara — and had seized from them one live pangolin, which they had allegedly brought to Pune to be sold to smugglers. The seized animal was estimated to be worth Rs 50 lakh in the illicit market.

In January, officials from Bharti Vidyapeeth police station had seized one live pangolin worth Rs 70 lakh and pangolin scales worth Rs 7 lakh in two separate cases.

Pangolin, also known as scaly anteater, is an insectivorous mammal, which has hard keratinous scales on its body. Two of the eight sub-species of the animal are found in India. The animal has been given a protected status in the country, as per the Schedule I of the Wildlife Protection Act. It is found in different types of forests and is known to be solitary and nocturnal in its behaviour.

Inspector Padmakar Ghanwat of the Local Crime Branch of Pune Rural Police said, “The arrested suspects have been involved in illegal trade of wildlife animals and animal parts. Our probe has revealed that they have two offences registered against them in jurisdictions of Thane and Raigad. We have contacted the Bharti Vidyapeeth police and we will try to find out if their case and the suspects we arrested have any connection. We hope that this leads to information about the trafficking of pangolin from the forests of Western Maharashtra.”

A senior police officer said that a coordinated probe will be conducted into the multiple cases registered in two years.

While pangolin scales are mainly used in traditional Oriental remedies and used as a male luxury item, its meat is consumed as a delicacy and is sold at a very high price in illegal markets.

While there have been cases of the animal being kept in houses as there is a superstition that it brings wealth, pangolin is one of the most trafficked animals and police suspect that multiple rackets might be active in some parts of Maharashtra, in which one chain catches the creatures from forests and sells them to middlemen in cities to be further sold to smugglers. Along with Pune, Thane and Raigad, live animals and scales have also been seized from Chandrapur district.