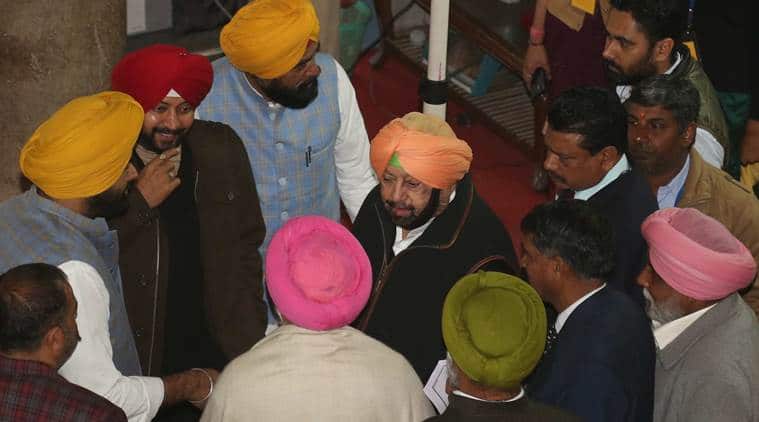 The budget session of Punjab Vidhan Sabha Tuesday began on a stormy note with the Shiromani Akali Dal-BJP members raising slogans against the government during the Governor’s address and then walking out of the House to protest alleged apathy of the ruling dispensation against farmers.

As soon as Governor VP Singh Badnore began his address to the House, SAD MLA and former finance minister Parminder Singh Dhindsa got up and started raising certain issues. He was soon backed up by other MLAs of the alliance who waived newspapers and shouted as the Governor continued with his speech.

Lok Insaaf Party (LIP) MLAs, Balwinder Singh Bains and Simarjit Singh Bains also protested inside the House against the Governor delivering the address in English and not Punjabi or Hindi. Both walked out of the House and later tore the copies of the Governor’s address. The two MLAs were demanding that the Governor should have made the speech in Hindi if he was not conversant with Punjabi. 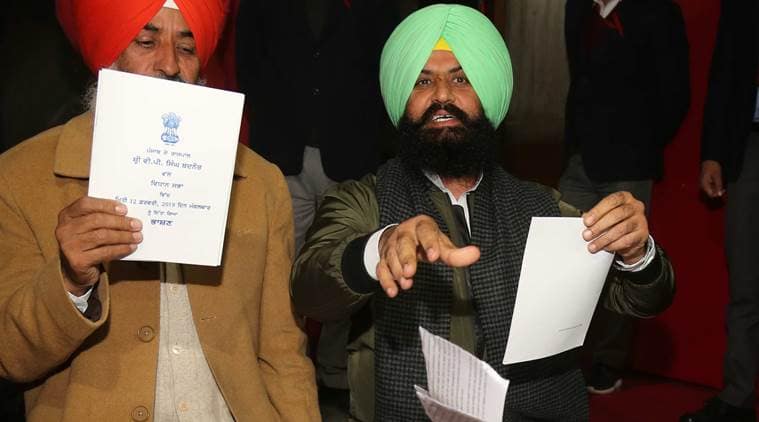 In his speech, the Governor gave credit to the state government for the Kartarpur corridor. ‘The prayers of all Punjabis for the last 70 years and efforts of my government have finally borne fruit with the laying of foundation stone (of corridor) to Kartarpur Sahib in Pakistan on November 26, 2018,” he said.

He added that the government will spare no effort to make this corridor operational by the coming ‘Maha Gurpurab’ on November 12, 2019.

He also elaborated on the plans of the government to celebrate the historic occasion of the 550th birth anniversary of Guru Nank Dev by planting 550 saplings in each village of Punjab. Under this campaign 75 lakh saplings will be planted by September 2019 in all villages of the state.

A day after the government faced severe criticism for the lathi charge on teachers in Patiala protesting and marching towards the residence of Chief Minister Capt Amarinder Singh to protest against the terms of their regularisation, the Governor said that the government was “seriously concerned” about the woes of teachers. He said the government was taking “all possible measures” to redress their grievances. “The government does not want its dynamic work force to suffer any disadvantage or handicap in any manner,” he said.

Stating that the government had inherited an empty treasury with an overload of pending bills for payment, the Governor said steps were being taken to restore the fiscal health of the state. “My government is facing severe financial constraints because of the financial imprudence of the previous government. They spent public money recklessly without caring for revenue receipts of the state. They had left the state with an outstanding liability of Rs 13,039 crore in March 2019,” he said.

For the first time in past couple of years no mention was made of the Sutlej Yamuna Link (SYL) Canal in the Governor’s address. However, he said that the government has taken every possible administrative and legal measure to protect state’s river waters. “Punjab does not have surplus water and is in fact threatened with a water famine in not too far a future,” he said. Though central authorities have declared Punjab as water starved state, the state’s water crisis the fact that the state does not have surplus water is not fully appreciated,” he said.

The Governor said the government has maintained peace and order in the state and has achieved “tremendous success” in neutralising gangsters. “1,414 gangsters have been arrested, including 10 Category A gangsters…19 terrorist modules gave been busted and 1010 terrorists and 22 foreign handlers arrested,” he said.

Stating that farmers’ welfare remains an “undeterred priority”, the Governor said his government has notified a farm debt relief scheme and it was being implemented with 5.83 lakh small and marginal farmers being provided loan relief to the tune of Rs 4,736 crore. “My government is fully convinced that farmers’ income can be doubled with greater ease and speed only by assisting them in subsidiary occupations such as dairy farming, piggery, goat farming, poultry,” he said.

Badnore said that the government is committed to pursue the recommendations of commission of inquiry headed by Justice Ranjit Singh to their logical conclusion allowing the law to take its full course.