Till Thursday evening, 3,14,556 workers — from 25 states, including Maharashtra, and the neighbouring country of Nepal — were stuck in as many as 2,531 locations across Maharashtra, according to an official report. 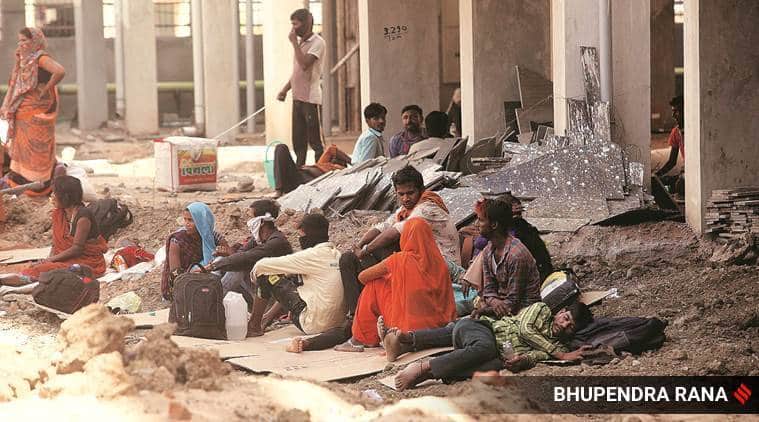 Midway through the lockdown, the state government appears to have finally got a count on how many migrant workers have been left stranded with little money and no food.

Till Thursday evening, 3,14,556 workers — from 25 states, including Maharashtra, and the neighbouring country of Nepal — were stuck in as many as 2,531 locations across Maharashtra, according to an official report. Of the 3.15 lakh workers, a total of 1,35,438 or 43 per cent, are from outside Maharashtra.

While Chief Minister Uddhav Thackeray has said that food and shelter are being provided to all the stranded workers, Pankaj Kumar, the development commissioner for the unorganised labour in Maharashtra, admitted that there may be a few more sites where the state has not been able to reach.

The state government has now created a centralised database of the stranded workers and their locations, which has been shared with all the state and civic agencies involved in relief operations. “We have created a shareable Google spreadsheet based on information collated by our (labour department) officers from various sources and has been shared with divisional commissioners and district collectors. They can use this database and also add their inputs to it,” said Kumar.

Thackeray had earlier received calls from chief ministers of West Bengal, Kerala, Bihar, Jharkhand and Punjab among others, asking for help for migrants from their respective states.

As per the latest records, the highest number of stranded workers were from Bihar at 30,320, followed by West Bengal at 23,679 and Uttar Pradesh at 23,136. Madhya Pradesh (16,903), Jharkhand (16,182) and Chhattisgarh (8,817) were also among states with a high number of workers stranded in Maharashtra. Authorities also found 87 workers from Nepal who had made attempts to return to their country.

While the Uddhav Thackeray-led coalition had earlier reversed the previous BJP government’s decision to provide Rs 5 meals under the Atal Aahar Yojana for construction workers, the government has now revived the scheme to tide over the crisis. Under the scheme, run by the Maharashtra Building and Other Construction Workers Welfare Board, the government has so far fed 47,191 of these workers in Mumbai, Thane, Punk and Nagpur, officials said.

Principal Secretary, labour department, Rajesh Kumar, said the collector offices, builders/contractors and NGOs were feeding the remaining trapped workers. “We are monitoring the situation round the clock. There are no serious complaints of a lack of food as of now.”

Maharashtra, India’s most industrialised state, employs about 3.5 crore workers in the unorganised sector. “Most of them have returned to their native places,” said Pankaj Kumar. While the state is yet to announce a financial assistance package for the loss of wages suffered by these workers, senior officials said, cash doles in the form of direct benefit transfers are being considered for the registered ones. The newly created database will also help in the identification and registration of new workers, said officials.”