UP Chief Minister Yogi Adityanath issued directions to officials to keep in quarantine the approximately one lakh people who have arrived in the state in the last three days from other parts of the country. 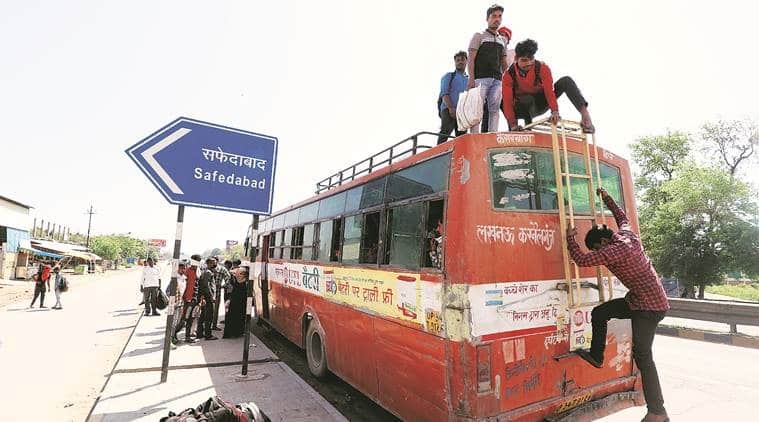 Blaming the Delhi government for the exodus of migrant workers from the National Capital, the BJP government in Uttar Pradesh on Saturday accused the AAP government of disconnecting water and electricity connections of people and being insensitive and indulging in “cheap politics at a time of crisis and playing with the lives of people of this country”. The Delhi government hit back, saying BJP was doing “petty politics” over the pandemic.

Speaking to The Sunday Express, Mrityunjay Kumar, media adviser to UP Chief Minister, said, “How did so many people reach the borders without the Delhi government allowing them to? Lakhs of people had reached the border late on Friday night. No arrangements were made for food for people of UP who were in Delhi. There were videos on social media where people could be heard saying that there was no arrangement for people in Delhi. There were also videos showing DTC buses dropping off people at the border.”

“Lakhs of people were on the border and they are our people. We had to make arrangements for them. They were picked up last night from the districts bordering Delhi and arrangements were made for them to stay and eat at different places,” the spokesperson said.

Later, in a series of tweets, Delhi Deputy Chief Minister Manish Sisodia said people at Delhi’s borders were not only those from the city, but also from Rajsthan, Haryana and Punjab. “I am very sad that BJP leaders have stepped to petty politics over the coronavirus epidemic… It is time to seriously work together to save the country instead of doing cheap politics,” Sisodia said.

Meanwhile, UP Chief Minister Yogi Adityanath issued directions to officials to keep in quarantine the approximately one lakh people who have arrived in the state in the last three days from other parts of the country.

According to a state government spokesperson, Adityanath said that in the last three days, one lakh people have come to UP from other states. Their names, addresses and phone numbers have been made available to the district magistrates and they are being monitored.

The CM also issued directives that all these people be kept in quarantine and arrangements for their food and other daily needs be fulfilled, a statement issued by the UP government said.

“No one in the state should remain hungry during the lockdown,” the chief minister was quoted as saying.

The prisoners who are likely to be released include undertrials whose offences carry a maximum sentence of seven years and convicts who have been sentenced to less than seven years.

Speaking to mediapersons at Lok Bhawan in Lucknow, Additional Chief Secretary, Home and Information, Awanish Kumar Awasthi said that in the context of coronavirus threat in jails, the Supreme Court had formed a committee that decided to release the prisoners on parole in the state.

Earlier in the day, the CM inspected the 210-bed COVID Hospital at the trauma centre of Sanjay Gandhi Postgraduate Institute of Medical Sciences in Lucknow. He also inspected the ICU, isolation and quarantine wards. The CM enquired about the three-stage screening facility set up in the hospital for coronavirus patients.

After this, the Chief Minister also inspected a community kitchen built in a Kalyan Mandap at Mahanagar.

While urging everyone to stay in their homes, Adityanath said that while nodal officers were deployed in 12 states a day before, on Saturday, Nodal officers were deployed in Himachal, Jammu and Kashmir, Odisha, Ladakh along with Kerala, Tamil Nadu and Chhattisgarh and the northeastern states. People who are in other states, doing business and jobs there, they can get all kinds of facilities by contacting the nodal officers. “The situation in countries which have been careless in dealing with coronavirus is very critical. So, my appeal to everyone is to stay where you are. You will be provided all kinds of facilities at your doorstep. For this I and my team are working 24 hours,” he said.

During his visit, he asked the medical officials about the quarantine facilities for the patients and asked the authorities to focus on ensuring “zero infection” among the health officials involved in the treatment of patients.

Meanwhile, Awasthi said ration, milk and vegetables are being distributed door-to-door throughout the state and grocery shops have been roped in for doorstep delivery. He said over 16,900 people are getting home delivery of essential commodities through 8,833 provision stores in the state.