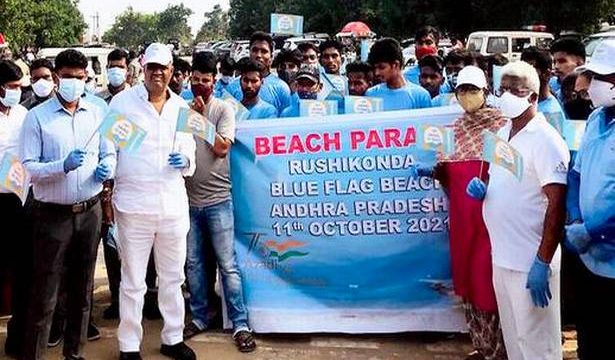 Speaking on the occasion, the Minister said that tourism was the maximum revenue earner after agriculture in Andhra Pradesh. Chief Minister Y.S. Jagan Mohan Reddy was keen on making Visakhapatnam as the Executive Capital of the State and was according top priority to tourism promotion. There were bright chances of Rushikonda Beach attracting tourists from abroad with it bagging the ‘Blue Flag’ recently. He said that 13 star hotels would be established in the State. Joint Collector Arun Babu underlined the need for public to keep the beaches clean to attract more tourists. He said that the Azadi Ka Amrit Mahotsav was organised at the Rushikonda Blue Flag Beach, under the auspices of the Ministry of Environment and Forests, on the directions of the Prime Minister. District Tourism Officer R. Purnima Devi, former Vice-Chancellor Ramakrishna, Regional Director of Tourism K. Ramana and AP Tour and Travel Operators Association president Vijay Mohan were among those present.