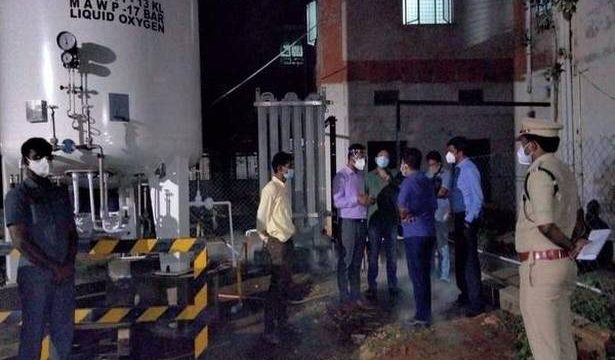 At least 14 COVID-19 patients died at the Government General Hospital at Anantapur on Saturday due to a snag in the oxygen supply pipeline. Six of the victims were in the Orthopaedic Ward and four in the Chest Ward. The four others were among the 180 patients on Oxygen Support and in the Intensive Care Unit. Unconfirmed reports however, said the number of dead could be higher.

Even as reports of deaths of patients in the hospital flooded social media and were reported by local television channels, District Collector Gandham Chandrudu denied that 10 persons had died by 1 p.m. due to lack of oxygen.

“I alerted the GGH Superintendent K.S.S. Venkateswara Rao and Resident Medical Officer about the low pressure of Oxygen, but they were in the denial. They corrected themselves only after a series of deaths took place in the evening,” Mr. Venkataramireddy told The Hindu.

Despite a rising number of deaths, it was only at 7 p.m. that Joint Collector Nishant Kumar and other district officials reached the hospital and tried to fix the oxygen pipeline from the 13kl LMO tank and vaporisers. Work to rectify the snag was still underway at around 9 p.m. as the collector also arrived at the hospital.

The Joint Collector, however, told the media persons that all deaths were not due to snag in the oxygen supply.

Authorities in the district have meanwhile, stopped sample collection to test for COVID-19 on Saturday as the VDRL laboratory at the Government Medical College here was unable to handle the volume of samples. The laboratory has a capacity of 6,000 samples, but everyday there were 8,000 to 10,000 samples coming from all over the district. Mr Chandrudu said further samples would be collected only after the backlog in the laboratory was cleared.