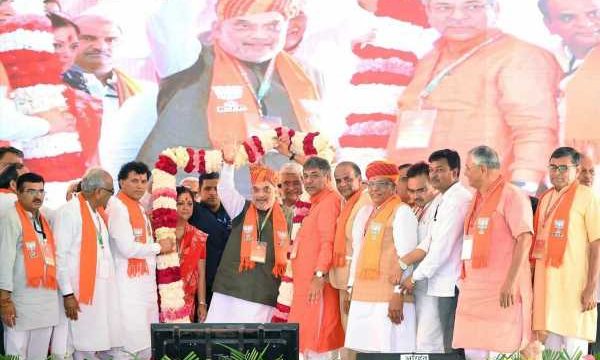 Gajendra Singh Shekhawat, Vasundhara Raje, Satish Poonia, Kailash Choudhary: Who will it be if the BJP comes to power in Rajasthan next year?

When Union Home Minister Amit Shah visited Rajasthan recently to address booth-level presidents of the Bharatiya Janata Party, what he said (and did not say) was as significant as the venue of the symposium.

The BJP brass places great importance on the interface between the central and state leadership and workers at the booth level. Shah underscored this in his speech.

The venue was chosen with care. Chief Minister Ashok Gehlot’s assembly seat, Sardarpura, is in Jodhpur.

The quartet of Shekhawat, Raje, Poonia, and Choudhary can be said to represent the pool from which the BJP will draw the chief minister should the party come to power next year.

The bulk of Shah’s speech at the venue was criticism of the Gehlot regime, designed to provide campaign points to party colleagues.

He reminded listeners about the scores of promises ‘made and broken’ by Gehlot: Law and order had collapsed; the state government had not made any effort to bring down petrol and diesel prices by reducing value-added tax; and power tariffs were punishingly high.

By way of contrast, he also referred to schemes started by his own party when in power: Most of which were initiated by Vasundhara Raje during her two terms as chief minister (2003-2008 and 2013-2018).

‘Ashok Gehlot had said in the last election campaign that he would provide employment to two million unemployed. If he has managed to meet even 10 per cent of the target, he should share the list with us. The rate of unemployment in the state during the Vasundhara Raje regime was 5.6 per cent. Under Gehlot, joblessness is at 32 per cent,’ Shah said.

It was not just the Raje regime’s work that came in for praise. Shah was even-handed. He referred to Shekhawat as ‘my friend’ and praised Poonia for his ‘diligence’ at booth management.

If listeners were hoping for a hint of a prospective chief minister from his speech, they were disappointed.

A BJP source active in state politics said: “Shah’s message to Raje and Poonia was that the elections would be fought under the leadership of Modi (Prime Minister Narendra Damodardas Modi) and they must work in unison and not as rivals.’

Before the Jodhpur event, the word from the central BJP to Raje was that she must be present to receive Shah while Poonia was told to drop his proposed yatra from Pokhran to Ramdevra. Shah’s ambivalence in naming the party’s choice of chief minister — unlike in other states — was noted by everyone.

An MLA, considered a Raje supporter, said: “Dushyant (the MP from Dholpur in Rajasthan and Raje’s son) is senior to Shekhawat and, therefore, is a stronger claimant to a ministry at the Centre.”

After the BJP’s defeat in Rajasthan in 2018, Raje lay low for a long time “until her supporters prodded her to be in the limelight again”, the MLA said. Otherwise, typically she used to hit the road six months before an election.

In November 2021, she re-emerged to conduct a ‘religious’ yatra in Mewar district and that had political overtones.

Interestingly, the yatra followed the eight assembly by-polls in which the BJP won just one seat. Raje had stayed away from the campaign, which Poonia oversaw.

However, the message of party unity delivered by Shah will, apparently, take time to percolate. Local newspapers noted that Poonia, who was asked to put off the yatra until Shah’s meeting was over, resumed it: But his other colleagues stayed away from it.

When asked, Choudhary said he “has no knowledge of it”. Shekhawat simply stayed away. Poonia noted this and tweeted pointedly, using a few lines of a Hindi poem to allegorically highlight the role of his colleagues.

Asked about the leadership projection tangle, Ramlal Sharma, the BJP’s chief spokesperson, said: “Our parliamentary board will decide whether to declare or not. CM candidates are not being declared anywhere so the elections will be fought under Modi’s leadership.”

“Whatever decision the board takes will be accepted by all,” Poonia said. “Our job is to oust the Congress and bring BJP back to power.”

A BJP source added, “Governments are changed because of three factors: Popular perception, anti-incumbency, and ground-level strategies. All three are in the BJP’s favour.”