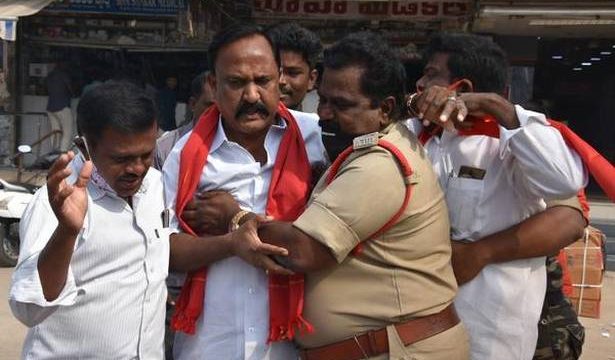 They burn copies of three Farm Laws in Bhogi fire.

About 50 activists of the Communist Party of India burnt copies of the three Central Farm Laws in traditional ‘Bhogi’ fire, alleging they were anti-farmer, at the Clock Tower Circle here on Wednesday.

While about 100 activists began gathering at the junction, the II Town police personnel kept the majority at bay by not allowing them to come anywhere near or disrupt the festival traffic on the roads.

Party district secretary D. Jagadeesh and other leaders arrived at the Tower Clock junction at 10 a.m. and raised slogans against the BJP Government for being adamant and not withdrawing the Farm Laws.

The police personnel waited till the copies of the laws, that are aimed at free trade of agriculture products all over the country, were burnt.

Within minutes all the CPI activists holding placards and flags raising slogans against the Centre, were rounded up and taken to II Town police station and released after an hour.

Mr. Jagadeesh said that the Centre should have taken a hint from the Supreme Court observation and staying implementation of the laws and withdrawn them by now.

"It is a big loss of face for the BJP and it was still trying to push through the laws by calling the farmer leaders to hold discussion with people, who were pro-government and had spoken in favour of the three laws," he said.

If the centre was serious about resolving the situation and working for welfare of the farmers, it should appoint people who were neutral and would look into all aspects that were beneficial to the farmers and country’s economy and not a few. corporate companies, he opined.