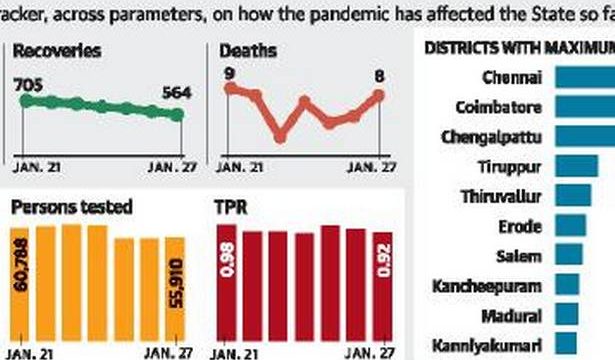 One district reported no new case of COVID-19, while 23 districts clocked fresh cases in single digits, even as 512 persons tested positive for the infection in the State on Wednesday. The fresh cases took Tamil Nadu’s tally to 8,36,315.

The new cases included five returnees — two from Delhi, two from Karnataka and one from Bihar.

In Chennai, 159 persons tested positive for the infection. There were 51 cases in Coimbatore, 28 in Chengalpattu, 26 in Tiruvallur, 23 in Tiruppur and 21 in Kancheepuram. While Perambalur did not report even a single case, Kallakurichi, Tirupathur and Virudhunagar had one case each.

As many as 564 persons were discharged after treatment, taking the total number of persons discharged so far to 8,19,306.

Eight more persons succumbed to the infection, taking the toll to 12,333. Four persons died in Chennai, while two persons died in Erode. Chengalpattu and Tiruvallur reported one death each.

Five of the deceased were in their 50s. One of them did not have any co-morbidities.

A 52-year-old man from Chennai, who had been admitted to a private hospital with complaints of fever, cough and giddiness on January 19, died on January 27 due to multiple organ dysfunction syndrome and COVID-19 pneumonia.

As many as 8,086 persons were vaccinated against COVID-19 in Tamil Nadu on Wednesday.

With this, the total number of persons who have been inoculated with either of the two available vaccines thus far has increased to 82,039.

Puducherry recorded one more death due to COVID-19, even as it added 24 more infections, taking its case tally to 38,934.

A total of 528 people have died in Puducherry, followed by 64 in Karaikal, 45 in Yanam and nine in Mahe.