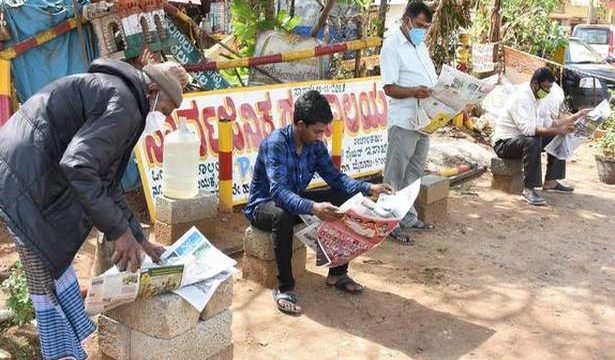 Syed Ishaq, whose library was gutted some months ago, is still raring to go

With the construction of a full-fledged library by the authorities in Rajiv Nagar in Mysuru delayed on account of COVID-19 lockdown, Syed Ishaq, whose library was gutted in April, is now planning to set up a temporary structure to provide shelter for the daily newspapers and its readers.

Though thousands of books that he had collected were destroyed in the fire that broke out in the early hours of April 9 this year, Mr. Ishaq continues to subscribe to a total of 18 daily newspapers including eight Kannada and five English besides eveningers and other language newspapers in Urdu and Tamil.

The plot of land, where Mr. Ishaq had set up the library, continues to draw people, who trickle in steadily from morning till evening to read their favourite newspapers. The people sit on concrete blocks that Mr. Ishaq has arranged for their seating just outside his burnt library. He also carries about 15 books every day from home to the same place and makes them available to the public for reading.

He said was looking forward to early start of construction of the library building by the authorities.

The Mysuru City Corporation (MCC), Mysuru Urban Development Authority (MUDA) and the Department of Libraries had jointly decided to take up the responsibility of constructing a library on the same plot of land, which belongs to MUDA. It had also been decided to entrust the construction to Nirmithi Kendra, a government undertaking.

Though the authorities were hoping to lay the foundation for the library on April 23, which is also the World Book Day, the project was put on hold due to COVID-19 restrictions and subsequent declaration of lockdown. In the meantime, the government replaced two key officials – Deputy Commissioner and MCC Commissioner.

Deputy Director of Libraries, Mysuru, B. Manjunath, said the process of taking the project forward will begin soon after holding a meeting with present Deputy Commissioner Bagadi Gautham and MCC Commissioner Lakshmikanth Reddy.