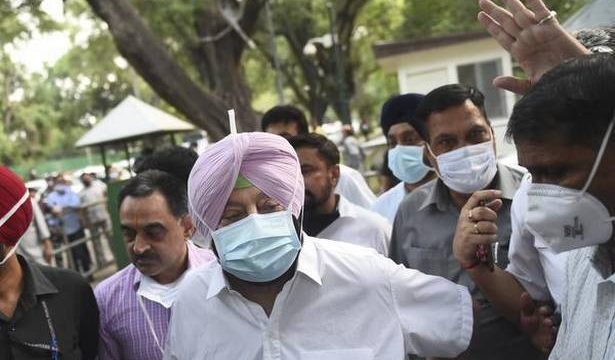 Punjab Chief Minister Amarinder Singh attacked the Shiromani Akali Dal over the issue of farm laws by posting a video of its leaders praising the bills, prompting SAD chief Sukhbir Singh Badal to take him on his pre-poll promise of farm debt waiver.

In the old video, Mr. Sukhbir Badal was seen saying that the Farmers’ Produce, Trade and Commerce (Promotion and Facilitation) ordinance would facilitate crop sale, and it did not aim to stop the purchase of crop at the minimum support price.

In the video, Parkash Singh Badal and Harsimrat Kaur Badal were seen asking farmers not to be misled by the propaganda launched by other parties, including the Congress, against these ordinances.

"Lest you forget @officeofssbadal, @ HarsimratBadal," Mr. Singh said in a tweet.

Snapping back at Mr. Singh, Mr. Sukhbir Badal uploaded a video released before the 2017 assembly polls in which he was seen promising farmers that the Punjab government would repay their debts taken from banks, ‘arthiyas’ and cooperative banks.

"Lest you forget @capt_amarinder," Mr. Sukhbir Badal said in a tweet.

The Akali Dal has been accusing the Congress-led government of not waiving farm loans completely.

The Shiromani Akali Dal last September quit the National Democratic Alliance (NDA) over the farm bills after it strongly opposed the matter in the Lok Sabha, claiming that these legislations would "destroy" the agriculture sector in Punjab.

Harsimrat Kaur Badal had also resigned from the Union Cabinet.