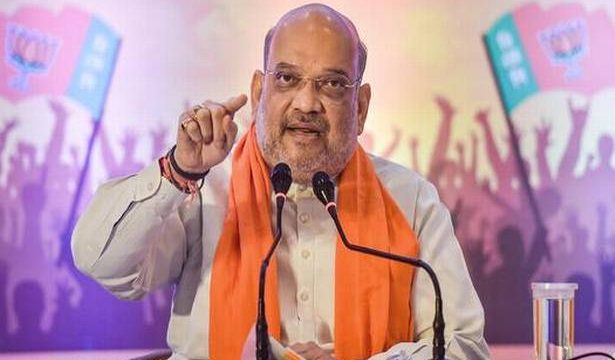 “At the time of the 2019 Lok Sabha polls, voters still had a bit of hesitancy on whether the BJP could defeat Trinamool candidates,” says the Union Home Minister.

Union home minister Amit Shah said that BJP led Central government was committed to framing the rules for the controversial Citizenship Amendment Act (CAA) and that the only reason it was delayed was because of the persistence of the COVID19 pandemic.

Speaking to The Hindu in an interview, Mr Shah said, the delay in framing rules is not due to the West Bengal Assembly resolution blocking the CAA “but the fact that it involves a large scale exercise in all border States. Due to the COVID-19 pandemic, undertaking this CAA exercise would not be advisable. The fight against COVID-19 is a priority that is why the rules for the CAA are delayed.”

Answering a question on advisability of large gatherings in poll rallies and road shows when India was undergoing a massive second wave, he said that there was “no alternative under the Constitution” to delay polls when the life of a legislative body had come to an end. “Maybe going forward if all parties come together we can come or should have suggested some alternatives to postpone polls or extend the life of elected Assemblies, but currently even the ECI (Election Commission of India) has no alternatives, and as political parties we have even less space, as we have to prepare for polls when the ECI sets the date,” he said.

Union Home Minister Amit Shah, on his campaign trail in West Bengal, spoke to The Hindu on the Assembly polls in the State, framing rules for the CAA and vaccine shortage…

We are now exactly halfway through the polls, and the upcoming seats include those of the Kolkata presidency, considered the strong areas of the Trinamool Congress. How do you expect to deal with that?

When I spoke of the BJP getting more than 200 seats, it was including the seats of the “presidency”. I believe the 109 seats considered part of the presidency, the BJP will take a lead.

On what basis are you making these claims?

At the time of the 2019 polls, voters still had a bit of hesitancy on whether the BJP could defeat TMC candidates or not. They wanted to vote for us, but no voter wants to waste his/her vote. Therefore the number of seats we got in 2019 has increased the confidence of voters on the party. Secondly, in our campaign since 2019, we have been successful in convincing the voter that we are not only standing for negative issues. We have been talking about development, of solutions to some of the long standing issues of the State, apart from the campaign that Mamata didi does minority appeasement, doesn’t pay attention to law and order, crimes against women are rising, there is no new industry being set up in the State etc. Our manifesto (sankalp patra) is very clear on our road map, and the people have been convinced by Prime Minister (Narendra) Modiji’s track record.

The violence in Cooch Behar during the polls has been tragic and Chief Minister Mamata Banerjee has been open about her accusations that the fact that you are the Home Minister is somehow connected to the Central para-military forces opening fire on voters. How do you respond?

I would first like to enlighten Mamata Didi on some basic general knowledge that during polls, the Central paramilitary forces deployed are not under the control of the Home Ministry but of the Election Commission of India (ECI). Also, in the same Sitalkuchi seat, Ms. Banerjee had made a provocative speech on surrounding the paramilitary forces putting them under pressure etc. Thirdly, if you look at the record of previous six polls in the State, including panchayat, Assembly and Lok Sabha, these set of polls have had the least violence. Before the unfortunate incident that happened, that very morning, our party worker Anand Vardhan was murdered, but since he was a Rajbonshi, Mamata Didi hasn’t spoken of him. If even in death we think of only our vote bank, I don’t think such a thought process will be endorsed by the people of Bengal.

It has been said that with the entry of BJP, communal and casteist politics has made an entry into West Bengal. That it is the destruction of what is termed “Bengali Exceptionalism.”

If Mamata Didi feels that we have done this, then I must say that she highly estimates our influence, because this means that we are setting the narrative of the polls. But I believe the whole election is about Bengali pride and how it was undermined by first the Left and the TMC, minority appeasement and lack of development by the Mamata Banerjee led government. This election is also about the Citizenship Amendment Act (CAA) of people who have been here for 70 years without being considered citizens, and living as refugee. We are going to implement the CAA very soon here.

The rules for CAA are yet to be framed.

As far as West Bengal is considered, the State Assembly has passed a resolution that they will block the implementation of the CAA, and added to it is the fact that rules need to be framed for the CAA. As far as the latter is concerned, the delay in framing rules is not due to the resolution, but the fact that it involves a large scale exercise in all border States. Due to the COVID-19 pandemic, undertaking this CAA exercise would not be advisable. The fight against COVID-19 is a priority that is why the rules for the CAA are delayed.

Referring to COVID-19, India is looking at a massive peak of the second wave. Large rallies and road shows are still being held. Don’t you think this is foolhardy?

There is no shortage of vaccine in India, and we have had the fastest rate of vaccination in the world. I concede that the speed of vaccinating the population must increase, and there are many vaccine candidates in the pipeline for approval and in the next month or so we will see more vaccines in play, that will increase the spread of our vaccination programme and improve the situation.